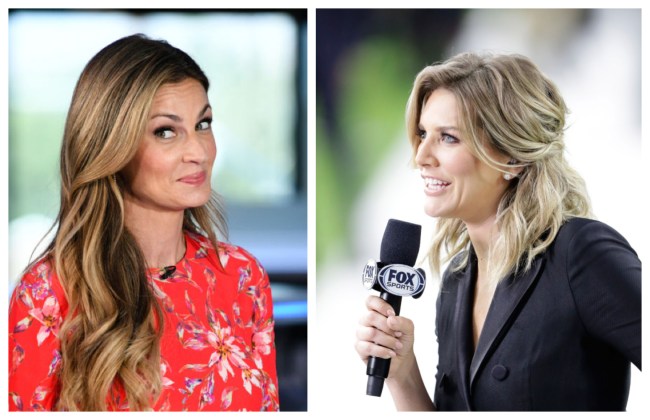 Erin Andrews and Charissa Thompson haven’t gotten to where they are today simply due to the fact that they’re good at relaying messages they hear from coaches and players throughout NFL games.

While their memory and presenting skills are huge parts of their success on the sidelines, so too is their ability to think on their feet and make stuff up that sounds legitimate.

Both Thompson and Andrews admitted as much during the latest episode of their podcast ‘Calm Down.’

Thompson shared a rather specific example of when she had to completely make up a report because a Lions coach started hitting on her ahead of the interview.

“I was like ‘oh coach what adjustments are you gonna make at halftime?’ He goes, ‘that’s a great perfume you’re wearing.’ I was like ‘oh f–k, this isn’t gonna work.’ I’m not kidding, I made up a report,” Thompson explained.

She was referencing a game she covered during Detroit’s 0-16 season in 2008, which the head coach of the Lions at the time was Rod Marinelli.

After Thompson shared her example, Andrews immediately admitted to doing the same thing.

“I’ve done that too,” Andrews said, explaining she did this “for a coach that I didn’t wanna throw under the bus because he was telling me all the wrong stuff.”

Neither of them went on to name any specific names during the podcast, but it’s still hilarious, and awesome, that the two openly admitted that they’ve made things up during live broadcasts.

Making something up sounds extremely difficult given the short time window these reports usually fall in. Hats off to both of them for being able to come up with legitimate stuff on the spot.

Thompson and Andrews admitting to making stories up may not have even been the highlight of the episode, the top moment was Andrews’ impression of Rams’ coach Sean McVay. Jay Cuter, a guest on the episode, certainly loved the impression.