Bold Strategy Cotton: ESPN Is Bringing Back ‘The Ocho’ And I’m About To Get Way Too Into Spikeball 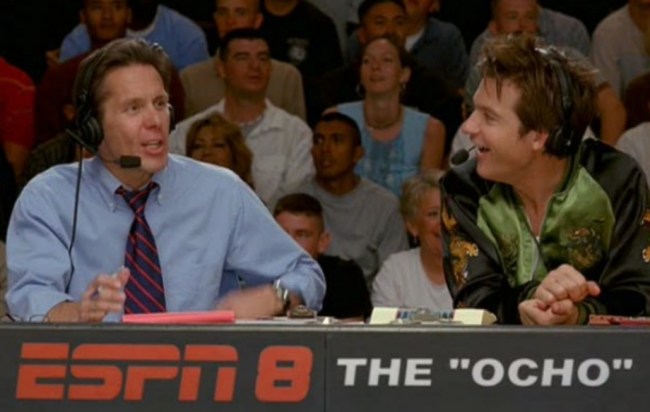 Much to my dismay, I just discovered Dodgeball: A True Underdog Story recently celebrated its 14th anniversary, a number that makes me feel about as old as Patches O’Houlihan and as useful as a poopy flavored lollipop. While it’s not considered a cinematic masterpiece by any means, it’s a perfectly dumb movie with some pretty clever moments, none of which I enjoy more than the concept of ESPN8— a.k.a. “The Ocho.”

The joke was a sendup of ESPN’s tendency to showcase sports no one cares about on its other networks, and based on the cornhole tournament I watched for way too long on ESPN2 while nursing a wedding hangover a couple of months ago, things really haven’t changed that much since Dodgeball first came out. However, it’s time to get excited if you’re a fan of obscure competitive sports because ESPN’s little brother will be transforming into “The Ocho” next week.

On Tuesday, the network announced ESPN2 will temporarily become ESPN8 next on 8/8 and will feature a lineup of sports you’d never go out of your way to watch, including (but not limited to):

The event will kick off at 12 AM next Tuesday with an airing of Dodgeball followed by a full day of Wu-Tang Clan-inspired competition and college sports that aren’t sanctioned by the NCAA.

This is the second year in a row ESPN8 will temporarily exist in real life and the only downside is it doesn’t appear the network has been able to convince Jason Bateman and the guy from Office Space to drop everything and serve as commentators for every event.