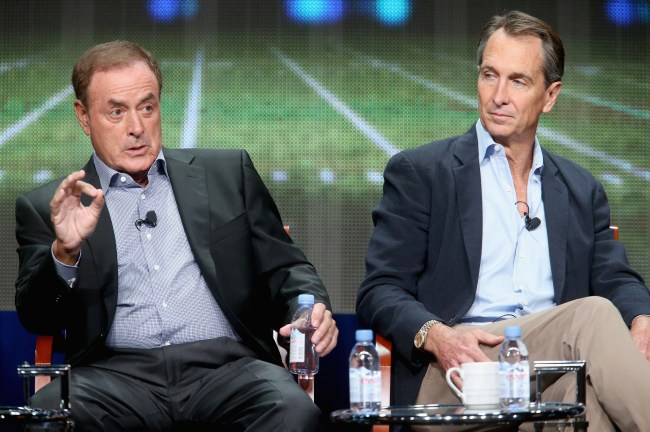 ESPN is doing everything they can to replace Booger McFarland and Joe Tessitore and the current Monday Night Football booth.

After striking out on signing Tony Romo last week ESPN is now trying to trade for NBC’s Al Michaels to pair him up with Peyton Manning according to a report from the Post’s Andrew Marchand.

NEWS: ESPN plans to attempt to trade for NBC's Al Michaels to pair with Peyton Manning for Monday Night Football, The Post has learned.https://t.co/CKL9BXOTXN

Thinking large and outside the box, ESPN plans to attempt to acquire Al Michaels from NBC Sports for “Monday Night Football,” The Post has learned.

ESPN would like to team Michaels with Peyton Manning in its dream booth, according to sources. Manning is now ESPN’s top choice as analyst after Tony Romo agreed to his 10-year, $180 million deal to remain with CBS last week.

The network believes a Michaels-Manning pairing would have the same sizzle as Michaels-Romo. Michaels, 75, is arguably the best NFL TV play-by-player ever, while Manning is one of the greatest quarterbacks in history.

Talks between NBC/Comcast and Disney/ESPN have yet to begin. Since Michaels has two years remaining on his contract, NBC could simply turn down ESPN’s request.

ESPN has also shown interest in free-agent quarterback Philip Rivers, according to sources. Rivers, 38, has said he intends to continue playing. NFL free agency officially begins March 18, but agents can start talking to teams on March 16

It’s easy to see why ESPN is desperate to shake things up, they want to expand their football coverage in the future and Booger and Tessitore just don’t fans excited to watch games.