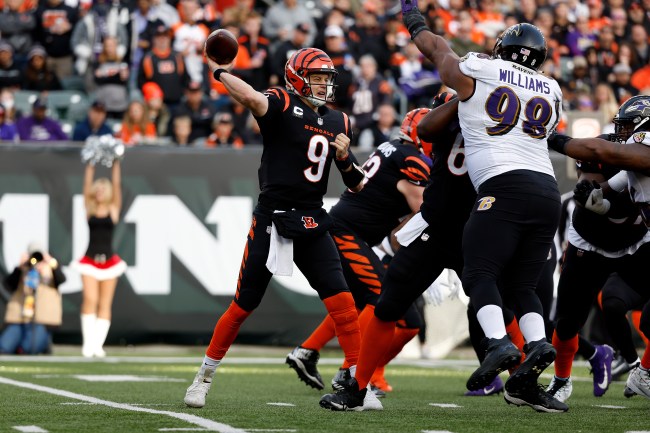 For the last few years in the NFL, the answer to “who would you start an NFL franchise with” has been pretty clear cut. Most people would have agreed before this season that they’d have taken Patrick Mahomes.

The Kansas City Chiefs certainly agreed with that sentiment when they handed him the largest contract in NFL history. Now, there seems to be some disagreement on which quarterback is the most desirable to start a franchise.

Today on First Take, Damien Woody announced that he’d take Joe Burrow over Mahomes if he needed a quarterback for the next 5 years.

“I’m gonna go with Joe Burrow. Sometimes it’s about the intangibles. And what Joe Burrow has done for that Cincinnati Bengals organization… It’s almost like he’s brought a chip on the shoulder to the whole organization.”

It might be a bit of an overreaction to the monster game Burrow just put up against the Ravens, but there is some merit to Woody’s opinion.

Joe Burrow has been very impressive in his first 2 NFL seasons in spite of playing for an awful team last year and tearing his ACL as a rookie. This year, he bounced back from the injury, has thrown for 4165 yards and 30 TDs, and has led the dysfunctional Bengals to the top of the AFC North.

It is quite the achievement, but I still believe Mahomes is the better franchise centerpiece. His second year was unbelievable, throwing off 50 TDs and over 5000 yards. He also already has a Super Bowl under his belt. Mahomes also isn’t that much older than Burrow with only 15 months between them.

Joe Burrow’s return from his knee injury has certainly been impressive to watch and is deserving of the Comeback Player of the Year award, but we should probably wait to see just a bit more from him before we start the Mahomes comparisons.