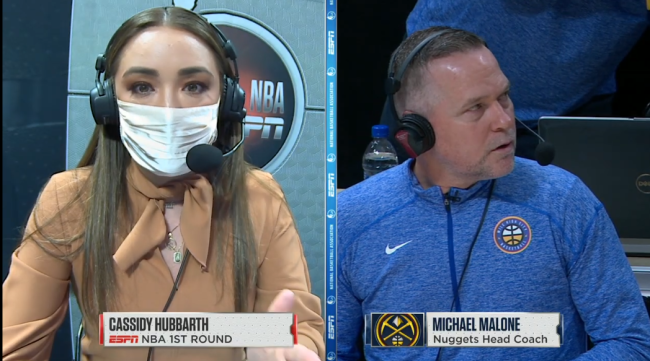 During Saturday night’s Blazers-Nuggets playoff game, ESPN’s Cassidy Hubbarth interviewed Nuggets head coach Michael Malone before the start of the fourth quarter while his team was down.

Hubbarth started the interview by calling Michael Malone “Mike” and things got a bit awkward when he instantly corrected her during the interview.

Hubbarth apologized on Twitter again for calling Michael Malone “Mike” during her interview with him.

When you call Michael Malone Mike…
Sorry coach!! I get it. I’m not Cassie. pic.twitter.com/q9ovbZtctS

Fans debated whether Malone was out of line for correcting Hubbarth on live TV or if he was right to do so considering Michael is his name.

Michael ‘Don’t Call Me Mike’ Malone kinda pushy on that name stuff. He must be under 6ft tall.

Mike Malone is kind of a jerk.

Yuck. My name is Michael. People call me Mike all the time. Who gives a shit. I understand being upset if people refuse to learn how to pronounce your name or something like that but this is annoying.

I’ve never felt a tweet more… My Name Is Michael Not Mike! https://t.co/7ZxXINm39Y

His name is Michael, he refers to himself as Michael. It’s not hard to call him by what he goes by.

If only Mike Malone, I mean Michael, put the same effort he did correcting Cassidy on his name into coaching his team, they probably won’t be down double digits right now 😂