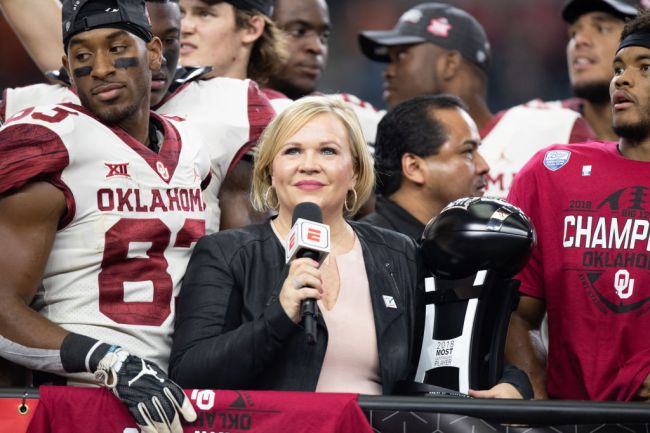 When Maria Taylor announced that she was leaving for NBC, ESPN was in need of a new sideline reporter for its primetime college football coverage. Well, the Worldwide Leader in Sports has chosen its replacement and it’s the right decision.

ESPN announced on Monday that Holly Rowe will join Kirk Herbstreit and Chris Fowler on Saturday nights. She will make her primetime debut as she kicks off her 26th season covering the sport for ESPN and ABC.

Nobody deserves it more than Rowe. She has worked for the company since 1997 and has covered almost every sport imaginable.

The players and coaches love her, they are comfortable being around her which means more open and honest interviews, and she brings a tremendous joy to the broadcast for those of us at home.

“Holly’s dedication to her work is indisputable, and the knowledge, passion and professionalism she brings to her craft every day shines through,” said Lee Fitting, ESPN’s SVP of production.

He is absolutely right. In addition to her impressive on-camera persona, Rowe knows how to have fun.

She is never afraid to let loose and the relationships she build because of her cheerful disposition translates onto the screen.

Happy birthday to one of the most fun and hardworking people EVER Holly Rowe 🥳 pic.twitter.com/J8cqoi5Q4s

And you never know what Rowe is going to hit you with next— like the fact that she speaks completely fluent french.

Rowe signed a multi-year deal to become the sideline reporter for the franchise and is the likely favorite to step in for Taylor on College Gameday as well. It couldn’t be a better decision by ESPN and I couldn’t be more excited.

I am not the only one who is thrilled about the decision. Rowe was moved to tears when she got the news.

Ahead of her 26th season covering @ESPNCFB games on ABC & ESPN, @sportsiren shares her thoughts on her new role

“Early in my career, I would cover the NCAA Division III National Championship every year and I met a legendary coach named Frosty Westering,” Rowe added. “His quote for life was ‘make the big time where you are’ so you’re not always chasing the big time. I’ve adopted that as my personal mantra and I’ve tried to make the ‘big time’ where I am, putting my heart and soul into every show and every game. It’s really special for that to finally pay off and I’m just grateful, honored and humbled.”

Congratulations, Holly! We couldn’t be more excited for you and we can’t wait for Saturday nights this fall.