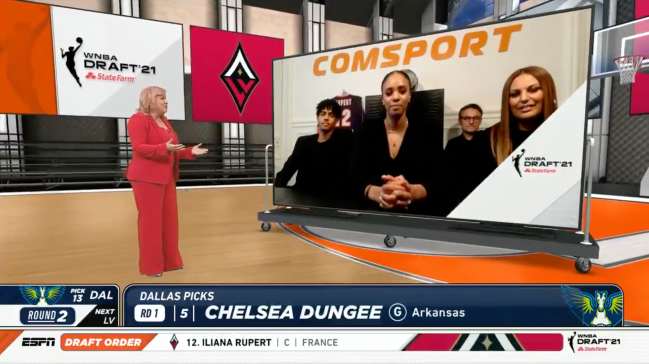 Did you know that Holly Rowe is fluent in French?! I did not. She was interviewing Illiana Rupert during Thursday night’s WNBA Draft and just casually slipped it in. The Draft took place remotely on ESPN and Rowe was chatting with the No. 9 overall pick, who was born in Sèvres, France. Rupert is 19 years old and is playing professionally for a club in her home country. She is a 6-foot-4 and plays primarily in the paint.

The 6-foot-4 forward is super young, but her experience playing pro ball has helped her become a player beyond her years. She has a lot of basketball left to be played with she doesn’t have much left to learn. If Rupert can get a few things figured out with her new team, she will be in the WNBA for years to come and has the chance to become a valuable piece for the Las Vegas Aces.

Rowe, who spent the summer in the WNBA’s “Wubble,” is very close with a lot of players in the league and is loved by almost everybody on planet earth. She joined the Zoom call and came in hot with her French fluency, asking Rupert if she speaks english. The two discuss her father’s passing, why she’s excited to be in the WNBA, and whether Rupert has been to Vegad before. She has not, but she is excited.

As the segment came to a close, Rowe closed things out with another message in French like a boss. She was so smooth with it out of nowhere.

Holly Rowe is fluent in French, too. pic.twitter.com/bZ7O1osORy

This language-bending conversation came two picks after Rowe was involved with another funny moment. She was trying to talk to No. 9 overall pick Rennia Davis, but the former Tennessee Vol was too busy watching her own highlight tape on the TV and provided hilarious commentary.

Rennia Davis was drafted 9th in tonight’s #WNBADraft and was too hype from her own highlights to talk with Holly Rowe 😂 pic.twitter.com/1k9qxLx6DZ

Rowe is always a pleasure to watch on TV and her nonchalant French was such a flex.