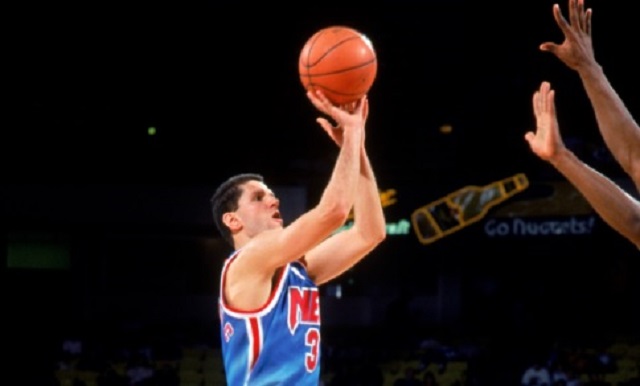 The legacy of Drazen Petrovic will not be disrespected.

During a skit featured on ESPN, Elle Duncan managed to take a shot at the late NBA star when she flippantly said that he ‘didn’t leave his mark on the game’ like Carmelo Anthony did.

This might be the most disrespectful thing I’ve ever seen on ESPN.

She clearly doesn’t know anything about the legacy of Drazen Petrovic aka The Mozart Of Basketball. pic.twitter.com/tGlaBgduIr

This really pissed of NBA Twitter considering that Petrovic, who tragically died in a car accident at the age of 28, is widely beloved and considered one of the most influential players of his generation.

You deadass just disrespected the CAREER of a player who died while he was just entering his prime. What the f*** is wrong with you?? pic.twitter.com/QJ8qXewnSx

Absoloutely ignorant saying Drazen didn't leave his mark on the game. It's the BASKETBALL Hall of Fame, not the NBA HoF. Drazen left his mark on the world and achieved incredible feats on the international stage before becoming an NBA All-Star. No wonder ESPN have so many issues.

I really think Melo career gets disrespected nowadays, but not as much as the disrespect you showed to Drazen Petrovic with that video. Just recognize your mistake and hope people forget about it, because this doesn’t make you look good at all.

Drazen Petrovic had a major impact on the game of basketball, most notably on the international stage. Very disrespectful to use Drazen to make an argument about a lesser player such as Melo.

This is poorly done. Ask any European player in the NBA (especially those who never saw Petrovic even play) and the impact he had on basketball in Europe. Players who were not even born have so much respect for him. Now go ask any current American player about Carmelo. Do better

It's sad to be a reporter, and you know so little about basketball. Petrović is the best Croatian player and European player of all time, and with his talent has opened the opportunity for other Europeans in NBA.

Duncan tried to defender herself but only ended up pissing people off with her response.

Yeah I know Petrovic died. How is questioning him being a hall of famer disrespectful? Real question

Elle, I’ve enjoyed your presence on SportsCenter and thought this segment was mostly fun. You chose a terrible example, though. Petrovic built the bridge from Europe to the NBA, showed the value of 3-point shooting when it was a novelty and did all of that despite dying at 28.