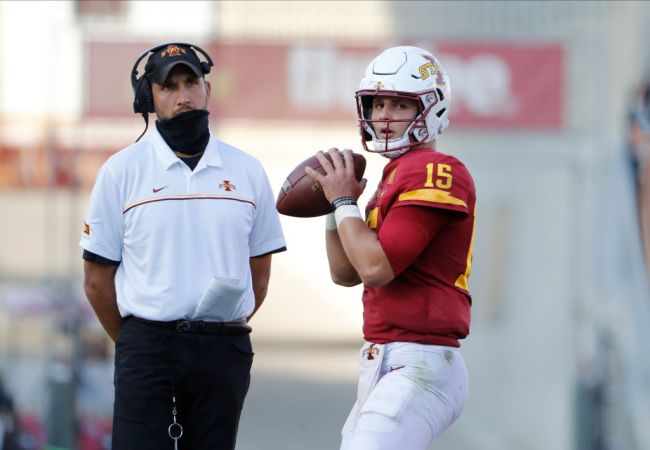 There’s no such thing as looking ahead toward the upcoming college football season too early. With just over four months until the 2021 season kicks off, ESPN decided it was the right time to release its first edition of the preseason FPI (football power index) rankings heading into the upcoming campaign. As per usual, there are some surprising teams toward the top of the rankings.

It’s no surprise to see Alabama occupying the top spot, the Crimson Tide are favorites to repeat as national champions, but after that, the list of teams is pretty questionable.

The statheads and analytic gurus at ESPN actually think that Iowa State is better than both Ohio State and Georgia? The Cyclones had a big year last year capped off with a win over Oregon in the Fiesta Bowl and yes, they do have Brock Purdy coming back under center, but to put them in the No. 4 spot is a bit of a stretch. Are they a Top 10 preseason team, sure, but this almost seems like ESPN put the Cyclones in the No. 4 spot to get people to talk, which, credit to the four-letter network, we’re talking.

While Mississippi State underwent some growing pains during what was Mike Leach’s first year in Starkville last season, the Bulldogs simply were not a good football team going 4-7 overall. State will take a step forward this upcoming season, there is no doubt about that with a young roster having one year of experience under its belt, but telling the college football world that the numbers show the Bulldogs as the No. 8 team in the land heading into the year is a tough, tough sell.

Then you have Penn State, a program that struggled mightily during the pandemic-stricken season losing its first five games of the year then closing out the season with four straight wins over the easier half of its schedule. The Nittany Lions will retool this upcoming season, head coach James Franklin won’t allow his team to lose five straight games right out of the gate, but going from an abysmal football team six months ago to the numbers showing Penn State as the 10th best team in the country heading into the year simply doesn’t make a whole lot of sense.

At the end of the day, these preseason FPI rankings don’t mean all that much, but recent history does show that, for the most part, they do give a rather accurate gauge as to which programs will have a solid season. Here’s a look at the Top 10 rankings heading into the 2019 season – it doesn’t make sense to look at last season’s preseason rankings – and where those 10 teams finished the season in the CFP rankings.

By late October we’ll be talking about some surprise teams and disappointments in the college football world, but right now we’re still in that part of the preseason where we’re looking at what the statheads predict for the upcoming campaign.