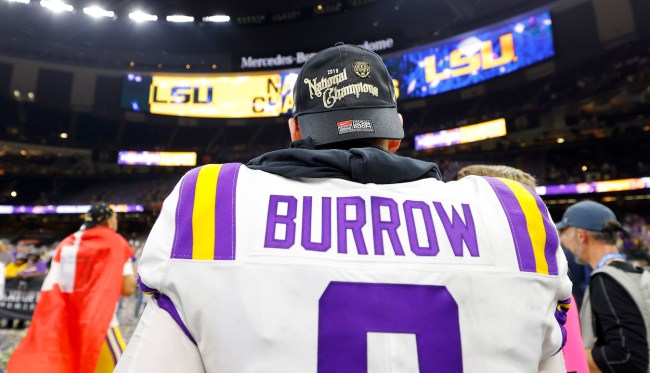 Back in the year 2020, the Joe Burrow-led Louisiana State Univesity Tigers overcame the Univesity of Clemns… wait… that was last night? You mean to tell me the National Championship happened within the last 24 hours? I apologize, the game was just so unforgivingly damn long that by the time it was over I felt like Leo at the end of Inception — an old man, filled with regret, waiting to die alone.

To be honest, while I’m not sure what the hell ESPN does every year to drag out the National Championship to clock in at around five hours, it seems to be getting worse every year. Despite the fact that the game kicked off at about 8:20ish, halftime didn’t roll around until like 10:45ish! Like I said, that’s some Inception level time fuckery right there. Fucking ESPN, man.

The Mothership’s onslaught on our senses wasn’t strictly limited to the television screen, though, as the official SportsCenter Twitter account tweeted out a Joe Burrow/Lil Wayne photoshop that has immediately established itself as the leader in the clubhouse for Worst Photoshop of the Year (so far).

A mock-up of Lil Wayne’s Tha Carter IV album, ESPN went into full “how do you do fellow kids” mode with this one — the Tigers are from Louisana, Lil Wayne is from Louisana, ya get it?!

Naturally, the replies to the tweet were less than kind as sports fans — hell, even their own employees! — begged ESPN to delete it:

Despite their best attempts, we cannot and will not let this borderline horrifying photoshop distract us from the fact that Coach O’s LSU squad are now National Champions. Geaux Tigers!