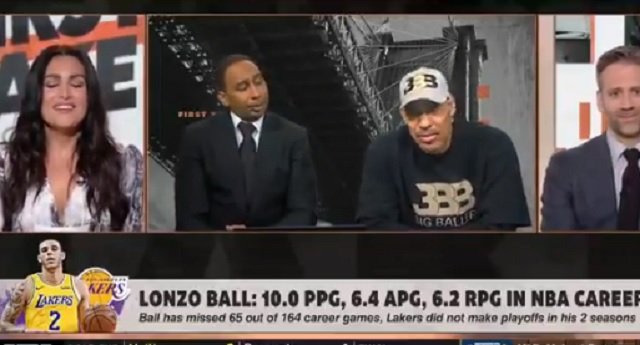 This weekend LaVar Ball was heated when he learned that his son was traded to the New Orleans Pelicans in the blockbuster Anthony Davis trade.

LaVar Ball on the Lakers trading Lonzo Ball: ‘I guarantee… it will be the worst move the Lakers ever did in their life and they will never win another championship. Guarantee it.” pic.twitter.com/Q1pxopsEdP

LaVar Ball on what went wrong in the short-lived Lonzo Ball-Lakers era, how Lonzo will make Zion better – ‘Lonzo could make Sara Lee better’ – and how ‘the Lakers gonna be known for always getting rid of great players.’ pic.twitter.com/EzV1f63xv2

LaVar made his way on to ESPN’s ‘First Take’ to once again blast the Lakers.

LaVar Ball says he wanted Lonzo out of LA because it was "Raggedy over there" pic.twitter.com/BMP97CcMRm

Things didn’t go entirely smoothly during LaVar’s interview this morning. When host Molly Qerim, who is married to former NBA player and ESPN player Jalen Rose, wanted to chime in to ask a question, LaVar got a bit too flirtatious for her liking.

@FirstTake Molly asked Lavar Ball if she could “switch gears” to take the conversation in another direction. Lavar said “you can switch gears with me anytime!” Why do we let this FOOL speak?! Not acceptable!

At the end of the show, Qerim joked about calling HR after the awkward exchange she had with LaVar.

The Internet began tagging Jalen Rose and called out Stephen A Smith and Max Kellerman for not checking LaVar on the spot.

Hopefully Lavar Ball’s out of pocket comment to Molly is the final straw on ESPN giving this fool air time ever again! 🙅🏽‍♂️ I hope @JalenRose for real checked that 🤡 off the air! @FirstTake

Lavar said to Molly "you can switch gears with me anytime" Omg she rolled her eyes so hard.

Treat professionals like professionals with no regard for their gender and get this clown off TV, he embarrasses himself and his family every time he speaks https://t.co/OWGOkE0Ue4

@JalenRose when he heard Lavar Ball tell @MollyQerim she could "switch gears with him anyday" 🤣 pic.twitter.com/XqpLQFzi8u

.@JalenRose yoooo Jalen tell your pops to chiiiiilllllll, I thought u was part of the family?!?! https://t.co/JZPxMzI0w4

@maxkellerman aren't you going to defend Molly? Loudmouth Lavar owes her an apology