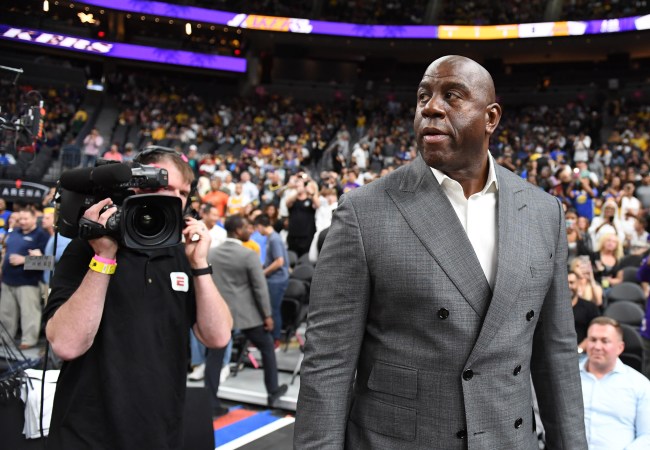 For the fourth year in a row, the Los Angeles Lakers failed to make the NBA playoffs, and there’s no shortage of reasons why. Depending on where your allegiance lies, you can point to the sloppily assembled roster consisting of volatile veterans like Rajon Rondo, Lance Stephenson, and Michael Beasley. Or the fact that the Lakers perpetually dangled their players in plain view of the New Orleans Pelicans in hopes of acquiring Anthony Davis. You wouldn’t be crazy in assigning a lion’s share of the blame to LeBron James, who brought with him a team of pals who conveniently secured jobs with the Lakers (three people close to James are listed in the Lakers’ staff directory as employees).

But, in a bombshell new report by ESPN senior writer Baxter Holmes, team executives Rob Pelinka and Magic Johnson were the engines that drove the franchise into the mud.

After Johnson’s sudden resignation in April, the former Laker great has since played the victim card, claiming general manager Rob Pelinka betrayed him. But, in multiple accounts from former and current Laker staffers, Magic was no boy scout. Magic reportedly didn’t accept excuses or mistakes and in a particularly contentious meeting with staffers, Johnson made it clear that he had a large stack of resumes sitting on his desk for anyone who wasn’t on board with his managing style.

“If you questioned him on anything, his response was always a threatening tone,” said a Lakers front office staffer who interacted with Johnson directly. “He used intimidation and bullying as a way of showing authority.”

…As one ex-Lakers star privately told confidants, “It’s f—-ng crazy over there.”

…”He comes off to the fan base with the big love and the smile,” said one ex-Lakers athletic training official who interacted directly with Johnson. “But he’s not — he’s a fear monger.”

Shortly after Rob Pelinka, who was formerly Kobe Bryant’s agent, was hired as the team’s new GM in March of 2017, at least two dozen staffers throughout the organization would leave. This would increase the workload for the remaining staff, which would prove to be dangerous for some.

…in one instance in 2017, a longtime female staffer was called into an office with Johnson and Pelinka after making a mistake, according to multiple staffers present and others familiar with the incident. The mistake, sources said, involved arranging a car service to the team’s facility for a draft prospect.

“I don’t stand for mistakes!” Johnson shouted at her. “I don’t make mistakes.”

Johnson also made clear, according to multiple people familiar with the exchange, that if the staffer made one more mistake, she would be fired.

In the office, the staffer apologized and later, off site, began to cry, according to multiple people with knowledge of the incident. In the months ahead, she would suffer increased anxiety and panic attacks. She was prescribed anti-anxiety medication, quit the Lakers after more than two decades with the team, and began several weeks of therapy, multiple people familiar with the matter said. She gave her notice on Dec. 18, 2017, the same day Kobe Bryant’s two jerseys were retired.

A Lakers executive said he also suffered panic attacks and had to be prescribed anti-anxiety medication. “Every day you go in there and you get this horrible feeling of anxiety,” the executive said. “In the last year, I can’t tell you how many panic attacks I’ve had from the s— that has happened there.”

Pelinka, who had zero experience as an executive prior to be hired by the Lakers in 2017, had his own head-scratching issues. In March of 2018, when Dwayne “The Rock” Johnson was addressing the team at the Lakers’ practice facility as part of the franchise’s “Genius Talks” series, Pelinka followed up The Rock’s message by telling a tall tale about his days as Kobe’s agent.

“There was one time when Kobe, who I worked with for 18 years, was going back to play in Madison Square Garden, and he had just seen ‘The Dark Knight,'” Pelinka said. “Obviously, you guys saw that movie, and he’s like, ‘Hey, hook me up with dinner with Heath Ledger, because he got so locked into that role. I want to know how he mentally went there.’ So, he had dinner with Heath, and he talked about how he locks in for a role.

“And Kobe used some of that in his game against the Knicks.”

“The Dark Knight” was released in July 2008, six months after Ledger died. A source with direct knowledge said no such arrangement was made and no dinner ever took place.

Head over to ESPN to read the entire piece about how deeply in disarray the “Lakers 2.0” are in and how there’s plenty of blame to go around.