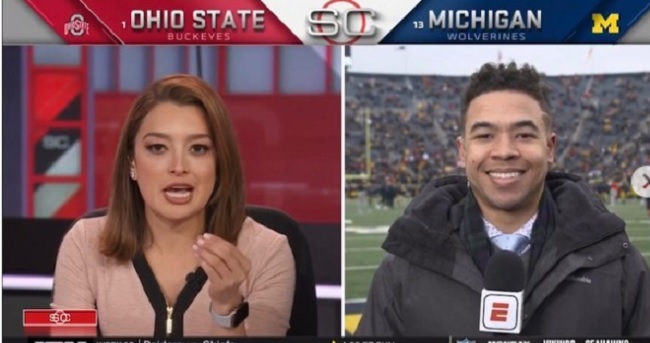 ESPN college football reporter Edward Aschoff tragically passed away on his 34th birthday according to a statement released by the network.

Statement from ESPN: “We are very sorry to have to share the devastating news of the tragic passing of friend and ESPN colleague Edward Aschoff. He died earlier today, his 34th birthday. Our thoughts are with his loved ones, including his fiancée Katy.”

Weeks before his death Aschoff went on Instagram and said that he had caught pneumonia while covering the Ohio State-Michigan game in late November.

Anyone ever had multifocal (bilateral) pneumonia in their early 30s as some who never gets sick and has a very good immune system? Asking for two friends … my lungs.

Damn. So I had a virus for two weeks. Fever and cough and the doctors think it turned into this multifocal pneumonia recently. I’m on day 4 of antibiotics. Days are getting better but nights are basically fever and coughing and sweating. How long were you out for?

Several of Achoff’s peers took to Twitter to honor their late friend.

I’m gutted today. Edward Aschoff was a supreme talent, yes, but he was a dear friend. He was going to be a superstar in our field. More importantly, he was so happy about getting married. He was just a remarkable soul. I can’t find the words tonight.

Devastated to hear my friend @AschoffESPN has passed away after a battle with pneumonia.

Ed was a big reason I decided to pursue journalism. He took me under his wing at the Sun and I’m forever grateful.

Incredible reporter and an even better person. You will be missed! pic.twitter.com/OIVvAYM5Kl

Edward Aschoff was a good man and a good reporter. He was very generous with his time for other people and had a passion for college football wherever he went on. I always thought he was going to be a preeminent college football reporter for ESPN for years to come. Tragic news. https://t.co/wCzSZvPCTZ

This is absolutely devastating news. Praying for Ed’s family. I can’t believe this. https://t.co/Cr3q9v1igE

Stunned and devastated. Incomprehensible, really. Ed was a tremendous guy, this is such a tragedy. https://t.co/nrUtpMJNpX