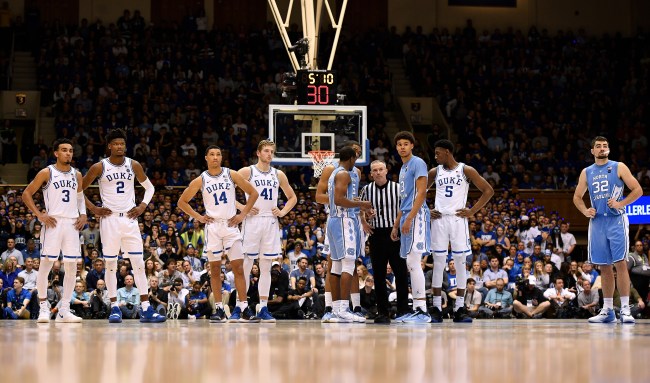 Every time something like this happens I always ask myself, “Who are these people that notice stuff like this?”

Because I really don’t know how people spotted this penis in the North Carolina locker room following the Tar Heels’ upset of the Duke Blue Devils.

The fact remains, however, that people did, ESPN showed a penis on live TV, and the internet had some pretty hilarious reactions.

Why networks like ESPN feel the need to have cameras inside the locker room immediately after any game is something I don’t totally understand. I mean, you just aired the game. We all saw how it ended. Can’t they wait until the players are showered and dressed to show them on camera?

I can’t believe I am being forced to pose these questions so early in the morning. Thanks, Obama.

Anyhoo, the internet had a lot of fun with it, so I guess there’s that. (And if you’re just dying to see it, you can right here. Though I do not know why anyone would want to do such a thing.)

Lol @espn just showed a guy’s dick on live tv. Seems like the perfect way to end a blowout when our best player gets hurt.

What are you doing @ESPN? Get your cameras off the penis. #dukevsunc

Nice work by @espn to get a UNC players dicks on live TV. 🤦🏻‍♂️

ESPN 100% just showed a players Penis in the UNC locker room. Unreal move how do you not cut away

You can tell @espn is flustered with Zion getting injured and the Duke loss because I just saw a flaccid penis on my living room television.

ESPN caught a dick slip on camera in the UNC locker room.. 😳😂

Worst part is, I could tell it was going to happen and could not turn my head fast enough.. 🤦🏻‍♂️

Dude. ESPN just showed a Penis on live TV when a player was changing in the locker room. Is this gonna be talked about at all?!! #penisgate

These people must have way better quality televisions than I do.