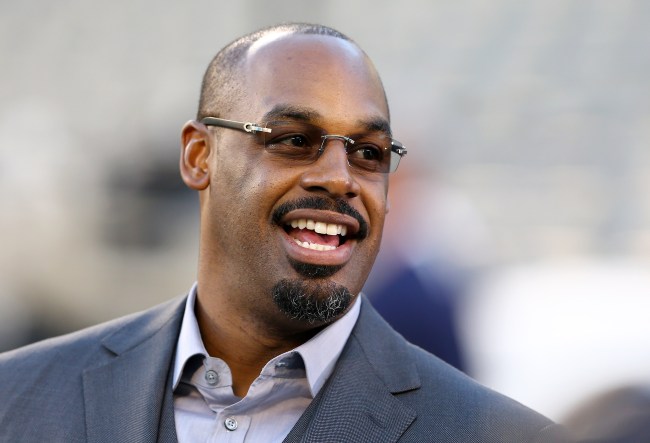 Last night, the NFL Network suspended on-air personalities Marshall Faulk, Ike Taylor and Heath Evans as the network investigate sexual assault allegations that were made against them by a 51-year-old former wardrobe stylist named Jami Cantor, .

According to Cantor, she was subjected to sexual harassment from not only Faulk, Taylor and Evans, but also from several other former employees including Donovan McNabb, Warren Sapp, Eric Davis, and former NFL Network executive producer Eric Weinberger.

TMZ has obtained a list of her grievances against the men.

Marshall Faulk (current on-air talent) — asked invasive questions about sex, “such as favorite sex position, whether she liked oral sex, and whether she dated black men.”se

“As time went on, Mr. Faulk became more aggressive, such as inviting Plaintiff to his hotel room, stroking and pulling out his genitals in front of her, pointing to his crotch and asking Plaintiff, ‘when are you gonna get on this already?’ He also pinned Plaintiff against a wall, demanding oral sex while he pulled his pants down.”

Warren Sapp (former on-air talent) — came into restroom while plaintiff was preparing clothes and urinated in front of her.

When she screamed at him to get out, Sapp said, “Sorry mama, but your office shouldn’t be our sh*tter.”

Sapp is also accused of giving the woman sex toys for Christmas 3 years in a row.

Donovan McNabb (former on-air talent) — sent text messages to plaintiff asking if “she was a squirter” and telling her she “looked like the kind of girl that squirted when getting f*cked.”

Eric Weinberger (former Exec Producer of NFL Network) — sent nude pics and graphic text messages including telling plaintiff she should be “getting f*cked every day.”

Today, ESPN announced that McNabb and Davis were going to be suspended during their own internal investigation of the claims.

ESPN on Donovan McNabb and Eric Davis re: the NFL Network allegations:
"We are investigating and McNabb and Davis will not appear on our networks as that investigation proceeds."

Those are some pretty wild allegations against McNabb and the others at NFL network, we’ll have to wait and see what happens when ESPN concludes during their investigation.