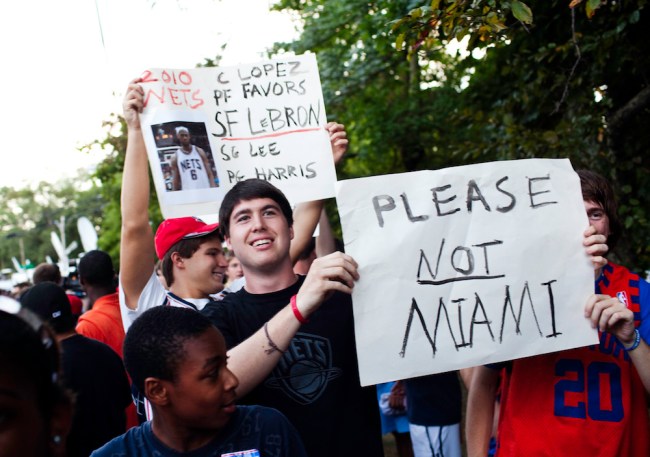 Great ideas happen all the time. It’s all about the execution.

A fan of Bill Simmons had a great idea back in 2009 for LeBron James, then a free agent and ready to make his announcement as to his NBA future.

“What if LeBron announces he will pick his 2010-11 team live on ABC on a certain date for a show called ‘LeBron’s Choice?'” a guy named Drew suggested in a Bill Simmons mailbag column. “What type of crazy ratings would that get?”

Simmons replied: “If LeBron were smart, he would market the event through his company, sell the rights to a network and reveal his choice on that show … He could even make it pay-per-view … I’m pretty sure they’ll pony up for $44.99 for “Decision 2010: LeBron’s Verdict.”

The identity of “Drew” and how his idea for “The Decision” went from a random mailbag to ESPN brass was unknown – until now.

“They both loved it,” Simmons later wrote in an email. “I mean, LOVED IT.” He also had a separate meeting with Carter. That weekend, Simmons enthusiastically pitched the idea to several senior ESPN executives.

Simmons pitched two ideas to his bosses: a 90-minute documentary following LeBron in his free-agency recruitment tour called “The Courting of the King” and “LeBron’s Decision,” in which he would pick his new team in a live show, both to be aired on ABC.

As they (Drew and his wife) listened to multiple national radio shows Friday previewing a new Backstory episode on The Decision, which debuts at 9 p.m. ET Sunday on ESPN, they learned that Simmons pitched the “Drew from Columbus, Ohio” mailbag column idea to James’ inner circle and ESPN executives in February 2010.

On Friday, Wagner’s friends began chattering on Twitter about their friend’s influence.

“He’s a good friend of mine,” said Graig Bachman, 39, of Columbus, an account manager for Enterprise Rent-A-Car, in an interview with ESPN. “And he hasn’t shut up about how that was all his idea since The Decision aired … Of course, he didn’t know that for sure. He just assumed. … It’s wild, kind of a whirlwind.”

“That was me,” Wagner said Friday in a phone interview about the mailbag email. “I sent that email, it’s posted by Simmons, and then seven months later, it’s the biggest story in sports.”

Drew Wagner grew up a Pistons fan and came up with the idea for the Decision-type broadcast because of “the trend of recruitment news conferences held by high school seniors announcing their college choices.”

This ESPN story gives an overview of how the idea started with Simmons, died, and was reborn for months, and how the Decision finally came to be one of the biggest sports moments of the last 20 years.

Backstory’s in-depth look at The Decision debuts at 9 p.m. ET Sunday on ESPN