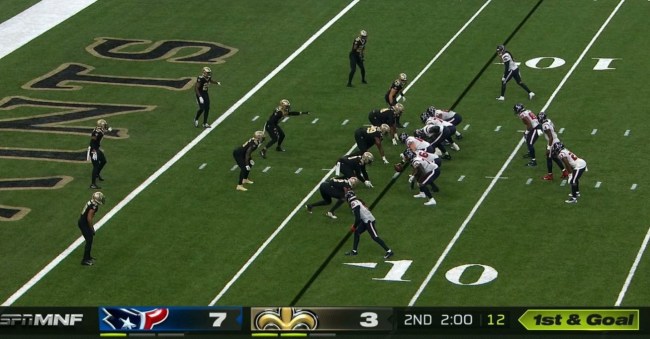 A new NFL season is upon us which means that TV networks are going to try to force-feed fans idiotic new graphics that everyone hates.

Tonight, ESPN debuted a new yellow down and distance graphic on their Monday Night Football broadcast that was really horrendous to look at.

.@espn please take this yellow-green down-and-distance color and throw it into the ocean. It looks like a flag pic.twitter.com/jNyMSY7kZA

NFL fans on Twitter immediately voiced their displeasure about the graphic that looked like a penalty flag had been thrown on every play.

RT this if you want @ESPN to change the color of the down and distance graphic on MNF.

We must stop this horrendous yellow penalty flag pump fake.

This yellow down and distance marker on the bottom of the screen for ESPN makes me think there's a penalty flag on every play. Who thought that was a good idea?

Checks to see if anyone else is wildly annoyed by ESPN’s yellow graph … OK, you’re on it.

ESPN needs to change the yellow graphic on the bottom right of the screen. I keep thinking it’s a flag. Whose idea was this?

ESPN has to change the color of their yellow down and distance graphic. Every time it changes I think there’s a flag!

ESPN apparently saw all the complaints on Twitter and immediately changed the color of the graphic at halftime.

Breaking: ESPN is switching away from the new Down-And-Distance graphic it debuted in the first half of Monday Night Football. ESPN heard the fans’ feedback and acted, quick.

Our ESPN production team is aware of the feedback on the #MNF down and distance graphic. We have called an audible and adjusted for the 2nd half of #HOUvsNO and for the #DENvsOAK game to follow. New look pictured here. pic.twitter.com/SWLKKuW87w

How much of a failure was ESPN's new MNF gfx pkg? They've already modified it for the second half. pic.twitter.com/r9yJI4bytJ

RIP the yellow down and distance marker.