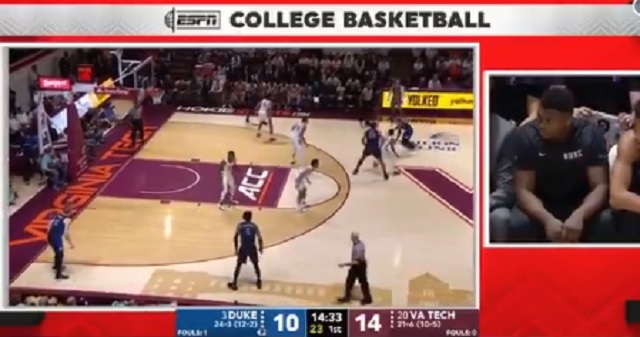 Last week the Duke superstar forward suffered a freak knee injury when his Nike sneakers exploded on the court during the first play of the Duke-UNC game.

While it seems like Zion is ok he’s going to be sitting out for awhile until he decides whether he wants to play this season or not.

During tonight’s broadcast of the Duke-Virginia Tech game ESPN decided to show Zion on the bench for several minutes despite the fact that he wasn’t going to play in the game.

ESPN really had a Zion bench cam running for several minutes….WTF, who wants to watch Zion reactions taking up a quarter of the screen? LOL…. pic.twitter.com/aOjUl1YU0r

The Internet was not pleased that ESPN’s pointless Zion cam was taking up so much of their screen during the game.

Is the Zion Cam necessary, ESPN? He's just sitting on the bench.

Yo @espn, enough with the Zion cam! pic.twitter.com/EwKLQuTJT1

Zion cam? This is dumb.

I turn on the Duke game and there is a Zion cam taking up a third of the screen while the game is going on. A Zion cam… He's literally just trying to watch the game like me.

Why am I watching a Zion cam? For a ridiculously long time. Gross pic.twitter.com/aqzaiWRiaY