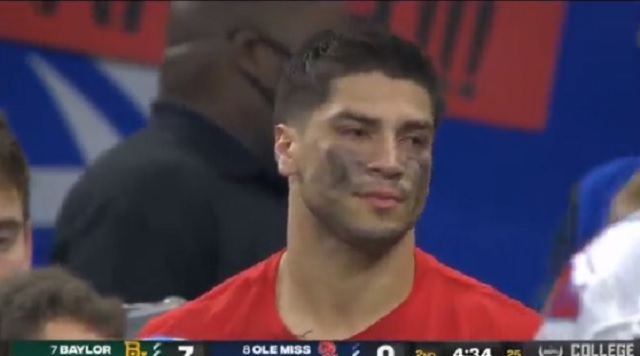 ESPN’s Joe Tessitore started trending on social media after he made some controversial on-air comments about Matt Corral during Saturday night’s Sugar Bowl.

Early in the first quarter, Corral, who many consider to be a first-round draft pick, had to be carted off the field with a lower leg injury.

Matt Corral has left the field in a lot of pain after this play. Praying for him 🙏#Baylor #Bears #SicEm #BUncommon #OleMiss #Rebels #HottyToddy #SugarBowl #CollegeFootball #BowlSeason pic.twitter.com/Be3NM9i33r

An emotional Corral would return to the sidelines to be with his teammates, and that’s when Tessitore went on a rant on how the Ole Miss QB did things the “right way” by not opting out of the Sugar Bowl to protect his draft status.

Joe Tessitore defending college football and saying Matt Corral “did it the right way” while Corral is emotional on the sidelines pic.twitter.com/txewxvZQ7i

“I know there’s been a lot of people railing on college football this year. The transfer portals, the NILs, the changing landscape, and are these postseason games really meaningful outside of the playoffs. Matt Corral is all you need to know. He’s doing it the right way, and he cares about it the right way.”

Tessitore was immediately criticized for his “doing it the right way” comments.

Matt Corral's on the sidelines on crutches with red eyes, and all Tessitore can talk about is how risking a career ending injury is "doing it the right way."

You can celebrate Corral's toughness – which was never in doubt – without disparaging other players. Absolutely shameful.

Let’s fault young men for not wanting to risk an opportunity to set up their families financially while still playing the game they love (in the NFL), all because they pass up on an amazing opportunity to play in the beef o Brady’s bowl

Allow me to disagree respectfully with Joe Tessitore. There is no “right way.” Corral may have potentially cost himself MILLIONS of dollars. Most media guys have not been in this position. Sitting out the bowl game is not a “wrong way” to do things. This is a business.

Imagine turning a 22 yr old into a martyr for your sick obsession with the old college landscape.

Players reserve the decision & shouldn't be ridiculed regardless of it. They don't need to be lectured on TV about doing it how you want it to be.

This is gross. Corral is heartbroken and your using it as your platform to show why players shouldn’t opt-out.

ESPN is clearly targeting opt out players because it hurts their product. https://t.co/YGtfwfSCE2