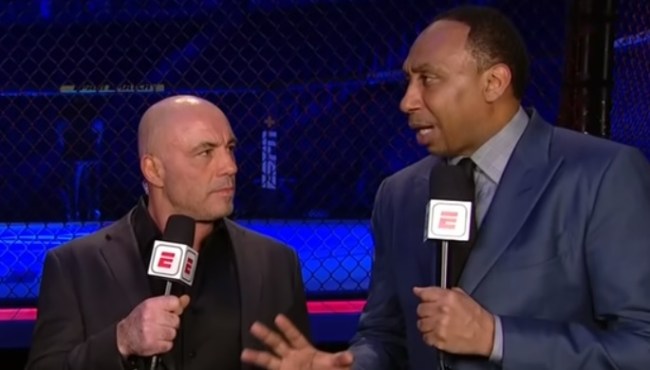 After Conor McGregor dismantled Donald ‘Cowboy’ Cerrone in 40 seconds UFC 246, ESPN’s Stephen A. Smith joined Joe Rogan and Michael Eaves at the postfight show and ripped Cerrone to shreds over his performance in the Octagon.

“I’m quite disgusted,” “Let me be very, very clear: I’m honored to be up here with you guys. I’m a spectator watching the sport. I expected to see more than 40 seconds. I predicted McGregor was going to win this fight inside of two rounds. I thought he would take him out. Here’s the deal: 15 seconds in, ‘Cowboy’ Cerrone was done. He got hit with those shoulders in the clinch, and he was done. It look like he gave up. It was just an atrocious performance on his part.”

Rogan went on his podcast on Friday to call out Stephen A. for being disrespectful towards Cerrone with his comments.

Daniel Cormier) and I would’ve had a completely different conversation and it would’ve been better for the sport,” Rogan said. “There’s no positive in downplaying the career of Donald Cerrone and what he can do as a fighter. What that showed to me is how phenomenal Conor performed. That’s what it showed to me. If either you or I was talking about cricket, and we were on TV doing commentary on cricket, we would look out of place. It would be (expletive) up and real cricket fans would be upset at us. That’s nothing. You are naked in the most literal sense of the word (in MMA). Physically, you are naked. Emotionally, when fighters lose, it’s (expletive) devastating.

“For Conor to smash ‘Cowboy’ like that in front of his wife, his kid, his grandma and the whole world. You’ve got to have some respect for that man, and this sport demands a different perspective. It’s not the same thing as a ball going into a hoop. It’s not the same thing as crossing a line with a football. It’s different. It’s very intense and very personal, and it’s also very (expletive) dangerous and to play it off like it’s just a game, I don’t agree with it.”

Stephen A. was clearly not happy about being called out by Rogan and posted a heated rebuttal on Twitter.

You're wrong on this one, @joerogan. pic.twitter.com/eU140zXlcW

“You don’t know me, so I’m not going to knock you for speaking out the way you spoke out without calling me. I don’t care about all that. I respect where you’re coming from. You’re just wrong on this particular one, and I’m telling you you’re wrong.”

Update: Conor McGregor has asked Stephen A. Smith to apologize to Donald Cerrone.