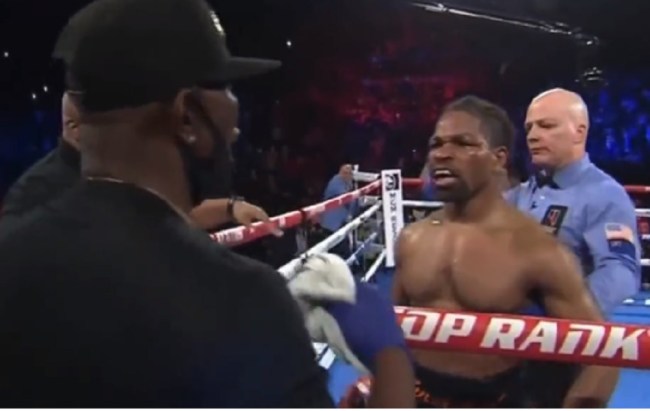 ESPN’s Stephen A Smith is not happy with Shawn Porter’s dad.

On Saturday night, Shawn Porter found himself in a competitive fight with Terence ‘Bud’ Crawford, who many consider the best pound-for-pound boxer in the world.

Unfortunately for Porter, he got dropped twice in the 10th round, and his father/trainer, Kenny Porter, felt he had seen enough.

After the fight, Stephen A. took to Twitter and blasted Kenny Porter for throwing in the towel.

That stoppage by the father of @ShowtimeShawnP was ridiculous. It probably wasn’t going to get any better.@terencecrawford is a bad brother. No.2 lb-4-lb behind @Canelo. But I don’t want to hear that it was GONNA get ugly. Damnit, it wasn’t yet. AWFUL STOPPAGE! Not right at all.

Update: Kenny Porter gave his reasoning as to why he decided to stop the fight.

“Honestly? His preparation.He didn’t prepare like I wanted him to prepare. So that makes me say, ‘You know what? I don’t want him in that situation.”

“He's fighting this guy blindfolded…it's an easy decision for me."

Kenny Porter on why he stopped the fight
pic.twitter.com/8JW6zLNB7b

Respectfully, this is not good. For @ShowtimeShawnP’s father to say his son “didn’t prepare?” To put his son on blast like that. I respect the Porter’s but damn…..that was just so disrespectful to say publicly like that. I like the man. Just wish he didn’t do that.