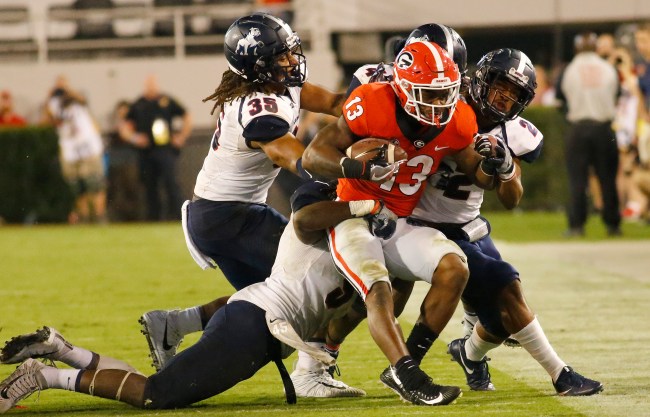 Hey guys believe it or not, the former undisputed heavyweight champion of the world has a son who looks like he could pick my limbs apart like Lego pieces. The apple doesn’t fall far from the tree I guess.

An image of Georgia running back Elijah Holyfield looking like the Incredible Hulk in spring training has been circulating on something known as the internet. For obvious reasons.

Meet Evander Holyfield’s son Elijah. He is a RB for Georgia. Anyone want to do goaline 1 on 1’s with him? #Dayumm pic.twitter.com/2M7WYLknuJ

The photo has been outed as a fake, although it’s only slightly photoshopped and doesn’t change the fact that Elijah Holyfield is a grown ass man.

The photo of Elijah Holyfield on the left is a picture I took and own the rights to.

The photo on the right is the same photo which somebody photoshopped to make his arms look bigger for absolutely no reason.

Here is Elijah in track, people think the dude is not real or something pic.twitter.com/jPVyqMHTOI

Elijah, who made headlines a few years back for scoring SEVEN touchdowns in a high school game, has played for Georgia for two seasons. He’s recorded modest numbers: 2 career touchdowns and 56 career carries.

When the original tweet of Elijah accompanied with the caption: ‘Anyone want to do goaline 1 on 1’s with him?,’ there was one taker. Rising Alabama linebacker Mack Wilson chimed in.

This isn’t just talk, Wilson is more than capable of banging Holyfield around. According to Saturday Down South, “in [Wilson’s] only career appearance against Georgia — in the National Championship Game, of course — Wilson registered a career-high 12 tackles, which also set the standard for individual tackles by any member of the Crimson Tide defense in 2017.”