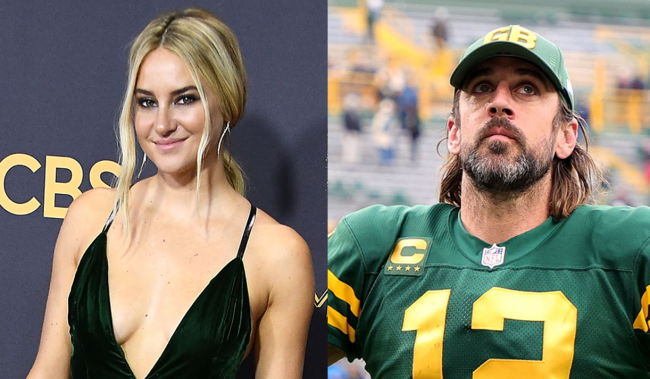 Last week it was reported that Aaron Rodgers and Shailene Woodley had broken up and called off their engagement because she felt “he put football first.”

A few days later, Shailene Woodley made news when she was spotted out and about without her engagement ring.

EXCLUSIVE: Shailene Woodley ditches her engagement ring for round of retail therapy as she is spotted for the first time since splitting up from Aaron Rodgers https://t.co/kNxhDS6MVX pic.twitter.com/sNrdOsmjQf

Then, on Sunday, Aaron Rodgers, out of the blue, dropped a cryptic Instagram post (which he says wasn’t cryptic) thanking a bunch of people in his life, including Shailene Woodley.

He wrote to Woodley, “Thanks for letting me chase after you the first couple months after we met, and finally letting me catch up to you and be a part of your life. Thanks for always having my back, for the incredible kindness you show me and everyone you meet, and for showing me what unconditional love looks like, I love you and am grateful for you.”

As if that wasn’t confusing enough, Rodgers appeared on The Pat McAfee Show on Tuesday and once again gushed about how great Shailene Woodley is.

“I’ve learned so much from her. She’s just an incredible woman, talented, smart, kind. When you have a partner like that it just makes life so much more enjoyable and tasteful and exciting,” said Rodgers. “When your home life is stable and you have an amazing partner to do life with, it just makes the work life a bonus. It changes the perspective.”

"I told Matt in my speech that 3 years together & 2 MVPs there's no coincidences. I also told Shailene I've been with you for 2 seasons & won 2 MVPs.. that's not a coincidence either" ~@AaronRodgers12#PMSLive pic.twitter.com/RX0fA7E2yQ

Are Aaron Rodgers and Shailene Woodley just trolling everyone?

Internet detectives were quick to pounce though when they heard a woman laughing in the background during the interview which sounded suspiciously like one Shailene Woodley.

Listen I watched the Secret Life of the American Teenager religiously back in the day. Sounded like Shailene to me 👀

McAfee also heard it and knew the moment had to be addressed. When asked who was laughing, Rodgers coyly stalled and then said it was the television.

The sleuths weren’t done there though.

Since I’m a psychopath, I have concluded that Aaron Rodgers and Shailene Woodley are in fact still together by observing a coffee mug… below is my evidence @AaronRodgers12 can you confirm that she was the woman in the background? pic.twitter.com/rwzgq870po

Fans were appreciative of his psychopathic tendencies.

You are the best psychopath pic.twitter.com/PcszC6v9yA

Here’s how he did it.