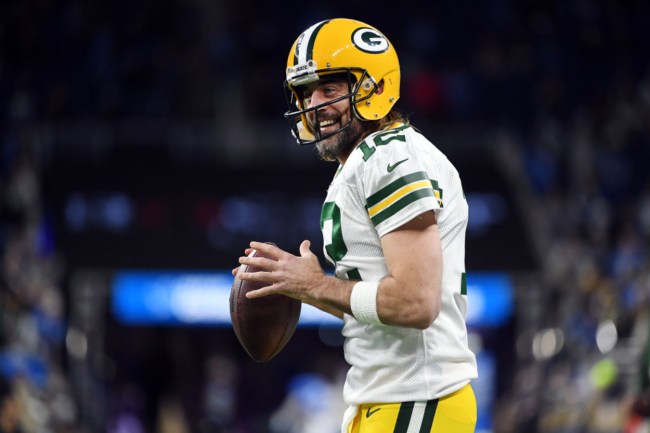 Nobody, maybe not even Aaron Rodgers himself, knows what the future holds for the four-time NFL MVP. Therefore, when he posted a lengthy Instagram post thanking his teammates, coaches, and his rumored to be ex-girlfriend Shailene Woodley, it’s understandable why people thought the post meant more than it actually did.

Rodgers’ post was immediately labeled as ‘cryptic’ with many thinking it meant that he might be retiring sooner rather than later. While it’s understandable for people to come to their own conclusions, Rodgers wasn’t trying to be cryptic at all, he was just feeling grateful.

The 38-year-old joined ‘The Pat McAfee Show’ for his weekly appearance on Tuesday and explained what led him to post the lengthy message to Instagram. It’s also worth noting that Rodgers just got done with a 12-day cleanse called Panchakarma.

“There’s nothing cryptic about gratitude,” Rodgers explained. “I just came out of a 12-day cleanse where you’re eating a specific diet and going through these treatments every day. You’re not doing anything else, you turn everything off, you’re not working out, it’s kind of a re-centering.”

“When I come out [of the cleanse], my first thought is just intense gratitude for the people in my life. That’s not every person in my life, there’s other people to highlight and credit, but that was just where I was at. I was going through some old pictures from the last year and felt an intense amount of gratitude for the life that I have and the lessons I’ve learned.”

"There's nothing cryptic about gratitude.. I was going thru some pictures from the last year & felt an intense amount of gratitude for the life that I have & the lessons I've learned" ~@AaronRodgers12#PMSLive pic.twitter.com/htggxJBirY

So, long story short, Rodgers was away from almost two weeks “re-centering” himself and eating clarified butter. He got out of said cleanse and was grateful for the people around him, that pretty much sums it up.