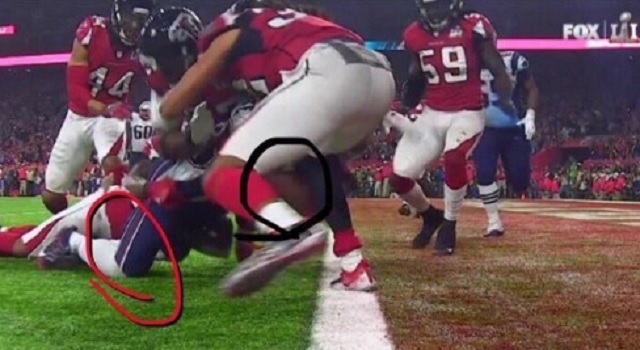 It was only a matter of time until someone would stir some controversy about the Patriots Super Bowl win last night.

After James White’s game-winning TD in overtime, several Falcons fans posted this pic that they feel shows that the Patriots RB was down during the play.

Not even a review? Knee looked down before he made the final stretch over the plane #SuperBowl #Falcons #Patriots pic.twitter.com/MVCwciRJ3a

Ima leave this here though , his knee was down !! pic.twitter.com/AjWERLu0Nu

His knee was down before the football 🏈 crossed the line and I won't root for cheaters. #SuperBowl pic.twitter.com/S9vIOWMU8L

The Super Bowl was rigged Tom Brady is Donald Trump favorite QB Atlanta really should have Won on me pic.twitter.com/U9FKqFh6dA

Of course the refs on the field were probably able to see the opposite angle on the play that would have shed more light as to whether White was down or not but don’t tell that Falcons fans or Patriots haters.