WATCH: This Fan Caught A Home Run While Filming Himself Catch The Home Run 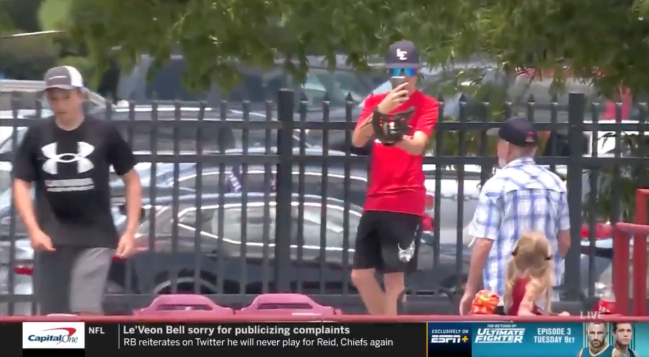 Dallas Baptist University may not have advanced to the College World Series, but one of their fans made the play of the day. The Patriots faced Virginia in a winner-take-all Super Regional game on Monday with their season on the line.

It was a stalemate through two innings until Jackson Glenn opened the scoring with a two-run blast. On the other end of the monstrous blast was a young kid with incredible hand-eye coordination. As the ball towered over the wall in left-center, he had his phone out to film the at-bat.

Incredibly, the ball flew into the stands and directly into his glove. He dropped neither the ball nor the phone.

Jackson Glenn got all of the one! 💪

Have to also give a tip of the hat to the kid who caught it while filming on his phone! 👍#RoadToOmaha x 🎥 ESPNU pic.twitter.com/sAS9pJyrSw

If you watch closely, it didn’t just fall out of the sky on dumb luck. The kid made a great leaping play!

Thankfully, the producer in the truck was quick to get on it. Less than two innings later, the broadcast showed the replay of the home run from the kid’s perspective.

The footage you have been asking for!#RoadToOmaha x 🎥 ESPNU pic.twitter.com/oiCa01AW8v

This occurrence is extremely uncommon, but it has happened before. Back in 2015, during a game between the Dodgers and Diamondbacks, a fan did the same thing.

Los Angeles went on to win the game six years ago. For Dallas Baptist, its fate was not the same.

Virginia added a run on a solo shot in the fourth, but the score held tight until the bottom of the seventh. In the top half of the same inning, the Patriots almost added to their lead. However, Hoos center fielder Chris Newell went up and committed highway robbery.

The batter thought it was gone. It wasn’t. pic.twitter.com/Ev992i66e9

The Cavaliers then took a lead they would not give back with a grand slam in the bottom half.

With their backs against the wall, @UVABaseball is now 6-0 in elimination games and are now headed to Omaha!#CWS x 🎥 ESPNU pic.twitter.com/9sK4nW0m5I

Regardless of the outcome for either side, there was no shortage of great plays. Shortly before the home run-stealing catch, DBU’s shortstop made a great diving stop.

Blayne Jones with the diving stop to get the out at 1st!@DBU_Baseball leads 2-1 through 6.#RoadToOmaha x 🎥 ESPNU pic.twitter.com/vpFlAqlZ8O

While they were all great, none of the plays top the phone-wielding grab. Get that kid on scholarship!