Fan Collapses And Dies At Ravens-Titans Playoff Game, The Third Death On M&T Bank Stadium Grounds In Less Than A Year 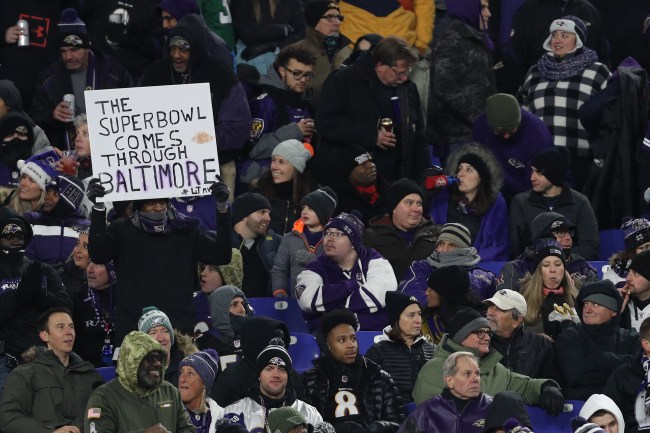 Well, this is awful.

Moments before the Ravens were stunned by the Titans at home and their historic season was prematurely cut short, a fan in the upper deck M&T Bank Stadium collapsed  and died while walking up the steps.

“We can confirm there was an incident last night at the stadium where a fan collapsed while walking on the steps of the upper deck,” a Ravens spokesman said. “Medical personnel arrived quickly, but attempts to resuscitate him were unsuccessful. We expect to have more information later.”

Baltimore Police Commissioner Michael Harrison said Sunday that the fall was reported as an accident and police are gathering more information on the tragic incident.

Last month, police announced that a dead body was found in a port-a-potty the Sunday following a Thursday night home game against the Jets. While the cause of death hasn’t been reported, temperatures in Baltimore dropped below 30 degrees the night before the man was found.

And last February, a max exited a port-a-potty completely engulfed in flames. By the time medics arrived, the man was dead and three portable toilets were on fire. The cause of the chaos remains unclear, though it isn’t believed to be related to a crime.

This was no fun to write.