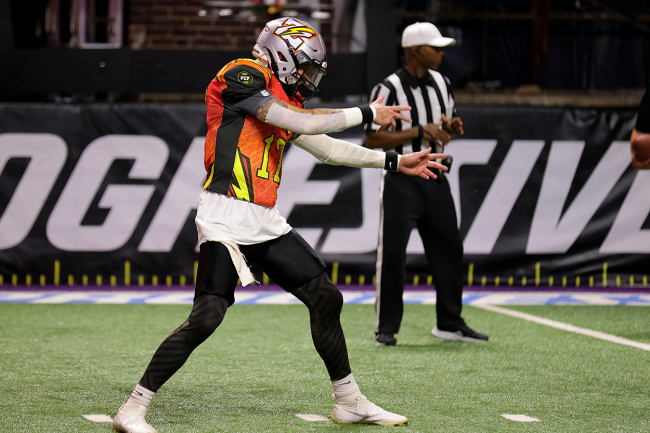 Former Memphis quarterback Jason Stewart had himself a Saturday in the Fan Controlled Football League. Not only did he lead the Zappers to a dominant win, he celebrated one of his touchdown passes with a very unique, unexpected celebration and it was awesome.

Stewart, who spent most of his career with the Tigers behind Paxton Lynch and Riley Ferguson, has since built a lifestyle for himself around fashion and trading. He has more than 109,000 followers on Instagram, has his own clothing brand, and is prominent in the Forex and digital trading space.

He also has a heck of an arm. During Saturday’s game against the Glacier Boyz, Stewart was lights out.

QB Stew slicing through the defense like a hot knife in butter.@FCFZappers with the 14-6 lead. pic.twitter.com/IbmLbmoo1h

And his teammates were impressed as he was mic’d up.

"Okay, the man has some serious swag"
~~
"He really does"

The Zappers went on to win the game 44-14 and did so in style. On one of his touchdown passes, Stewart threw a dart to the corner where only his receiver could go get it.

To celebrate, he walked over to the sideline, reached under his jersey, pulled out a joint and proceeded to spark it up on the field. After taking a hit or two, Stewart passed the lit doobie to a fan in the crowd and got on with his day.

Stewart had said previously that he was going to celebrate in such a fashion, and he did. He’s a man of his word. It was legendary.

QB threw a touchdown & lit up a joint to celebrate 🤣🤣🤣🔥🔥🔥 pic.twitter.com/4DB9GhBaJr

To explain his celebration, Stewart said that he is trying to change the narrative about cannabis. He asked why it’s okay when a football player celebrates by drinking a beer but not with a joint.

Aye QB that hit the joint was spittin 💯🔥😂

“If a Athlete scores & goes to drink a beer it’s okay but heaven forbid we hit the gas…cmon” pic.twitter.com/zZFcDWiLFL

Ultimately, after his celebration, Stewart came out and said that he believes he may have played his last down of football and may no longer be a part of the Fan Controlled Football League. He continues to stand by his celebration and is on to the next chapter.

What a moment in time!