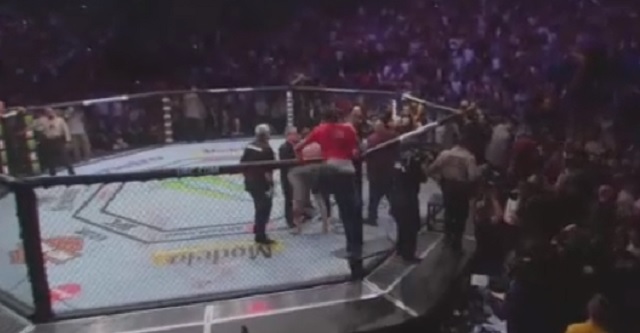 Tonight’s UFC 229 fight descended into chaos after Khabib Nurmagedov jumped outside of the Octagon to fight one of Conor McGregor’s trainers.

While Khabib was in the crowd fighting the trainer a man somehow sneaked into the Octagon was able to deliver a few blows on Conor McGregor.

Apparently the man was a part of Khabib’s team and was arrested.

Dana White just confirmed on Fox that all 3 people that jumped Connor were arrested. This whole thing is far from over…in and out of the cage. Super sad as a mega UFC fan

Per Dana White, members of Khabib Nurmagomedov’s team have already been arrested. He says commission has froze main event paychecks for now. Says they took special security measures and this still happened.