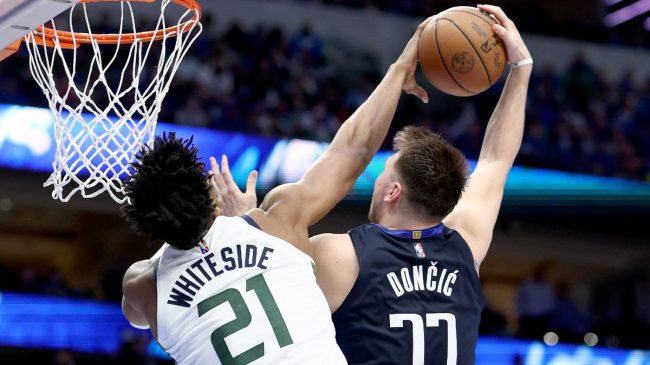 Luka Doncic’s acting skills were on display once again in the NBA playoff action.

In the Mavs’ 25-point blowout of the Utah Jazz, the European star got into a tussle with Hassan Whiteside. The altercation led to benches clearing on both sides, some pushing and shoving, and a pair of ejections.

Late in the contest, with Dallas leading big, Doncic attempted to put Whiteside on a poster with an emphatic slam dunk. The jam didn’t go quite as planned for the Mavs star.

Not only does Doncic travel while trying to get a little extra elevation from the floor, but he’s subsequently stuffed by the Utah defender. A foul was called but it looks like Whiteside got all ball on this block.

Watch it all unfold below.

Reggie Bullock and Whiteside were both ejected pic.twitter.com/HqzgZ0pg45

After getting embarrassed at the rim, Doncic then falls to the ground while holding onto Whiteside’s arms. In Whiteside’s attempt to untangle himself from Luka’s grasp, Doncic smacks the floor.

That’s when the pushing and shoving begins, even as Whiteside is trying to help Doncic off the court. The tussle wound up getting the Jazz defender ejected, but fans aren’t about to let Doncic get away with yet another egregious flop.

Doncic, being from overseas, brings that soccer-style, flare for the dramatic approach to his game. While he’s budding into one of the league’s young stars, his antics have grown old for most viewers outside of Dallas.

I like Luka but my dude is an actor my goodness. Flop city.

Here’s the reaction to his latest flop on social media.

Uh… Whiteside did not do anything wrong.

Went up vertically, came down clean, Luka held on to him and then threw a tantrum.

Sorry but Luka wasn't gonna dunk that on an 8-foot rim.

Not sure why he hung on for dear life. Whiteside did nothing wrong.

Luka when he realized he couldn’t dunk on Whiteside. pic.twitter.com/JL6TBD1B79

Lol Hassan Whiteside didn’t do anything. Looked like Luka flopped after the foul. 😂

Hassan Whiteside actually didn't do anything lmao Luka was .00001 seconds away from getting his help to get up

Tbh, Whiteside did nothing wrong there. Luka grabbed him otw down and decided to make this bigger than it needs to be

Luka held onto Whiteside like my 2 year old trying to tackle me lol.

The fans have caught on to Doncic’s style of play. Hopefully the NBA officiating crews will, too, so we can avoid these unnecessary outbursts.