MUST WATCH: Fan Runs Onto The Field And Drops Aston Villa’s Jack Grealish With Sucker Punch To Back Of Head 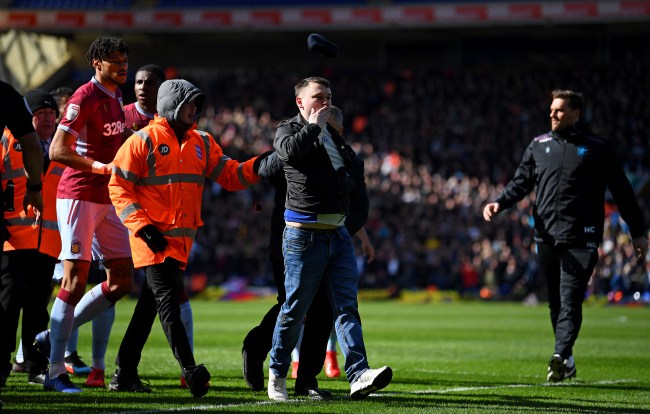 A Birmingham City fan is currently sitting in a jail cell and will be for the next 14 weeks after pleading guilty to assaulting Aston Villa midfielder Jack Grealish during Championship play on Sunday.

27-year-old Paul Mitchell ran onto the field and at Birmingham City’s St. Andrew’s stadium while Grealish’s back was turned and took a swing at the side of his head. The incident occurred in the 10th minute of the match after the ball went out for a corner kick.

In a beautiful display of poetic justice, Grealish would go on to score the game-winning goal in the 1-0 Villa win.

After the game, the 23-year-old midfielder claimed “shocked and scared” by the attack, but would later say yesterday was the “best day of my life” for scoring the game-winner.

As for why Mitchell would commit such a disgraceful act, even his lawyer is confused.

“He cannot explain what came over himself yesterday morning.”

“His initial foolish intention was to go onto the pitch to whip up the crowd. He is certainly remorseful today. He is a man with a partner, they have a 2-year-old together and they’re expecting their second child.”

Welp, Mitchell didn’t have his family’s best interest at heart, seeing as his family had been forced to move out of their home overnight through fears of “serious harm or even death.”

27? Jesus. Hatred clearly takes its toll on the face. pic.twitter.com/KBk2AS5UXu

According to ESPN, Mitchell also pleaded guilty to invading the pitch and has been banned from attending any soccer match in the U.K. for 10 years. He was also ordered to pay £350 in fines.

After the game, Birmingham City apologized to Grealish and Aston Villa on Twitter.

CLUB STATEMENT: Birmingham City Football Club would like to apologise to Jack Grealish and Aston Villa Football Club for an incident in this afternoon’s derby match.

After Grealish scored the game-winner, a Birmingham City steward appeared to lay his hands on the young star and kick him. Reports circulated that the steward, too, was arrested, but those reports have been squashed. Just a dick move.

Steward was arrested after kicking Jack Grealish in the away end. #avfc pic.twitter.com/Ud5Ds60Pok