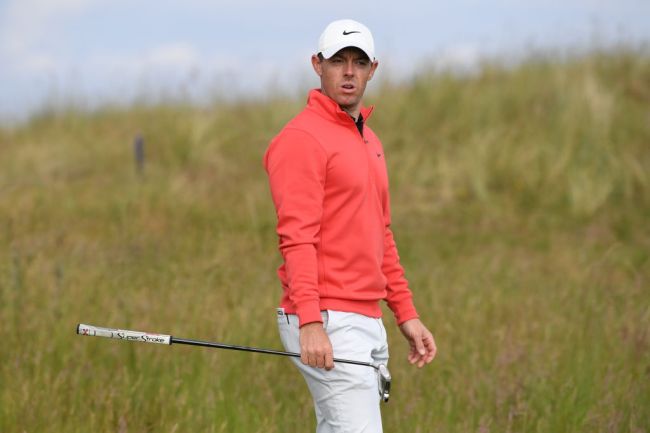 A fan at the Scottish Open was sick of watching the golf and wanted to take a few swings of his own. Naturally, he decided to walk up to Rory McIlroy on the 10th tee, grab his driver headcover and an iron out of his bag and act as if he was going to launch the headcover down the fairway.

The video is truly bizarre and almost creepy in a way given the fact that nobody says a word for a full 30 seconds.

A random fan walked up to Rory’s bag and took his headcover and an iron. The scene is more weird and creepy than funny. pic.twitter.com/QGWPQBg6x6

Rahm explained after the round that the fan was very much not sober and that he could literally smell the booze on him. His guess was that the guy hit the vodka rather hard earlier.

“Let me put it this way: You could smell the reason why he did what he did,” Rahm said. “He was clearly not sober. I’m going to say it was vodka. I’m no expert, but he had a long night for sure.

He probably thought it was a fun idea. And, to be fair, it was quite funny. At one point I thought he was going to Happy Gilmore the headcover. I don’t think it put Rory off. He hit maybe his best drive of the tournament off that tee. He started playing beautifully. If anything it put a smile on our faces. It’s a pretty good story to tell in the future.”

As for the video itself, one of the funniest moments is when McIlroy looks at the fan taking his club for a second, looks at his caddie, and does a double-take fully realizing that a fan just walked up and stole his stuff.

You also have to love the fan giving the club back, but hanging onto the headcover as if he was going to walk away with it as some sort of souvenir.