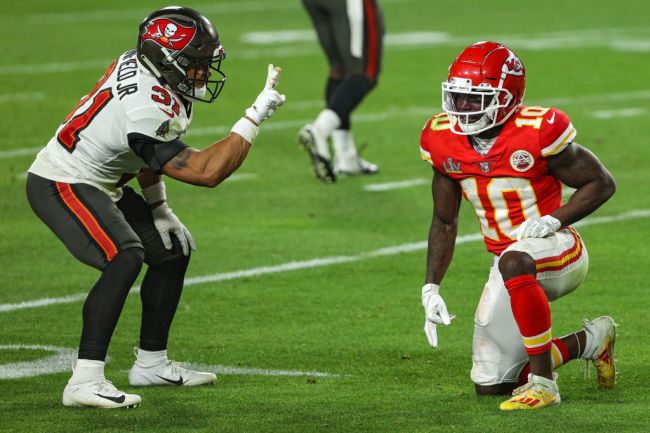 The No Fun League is at it again.

On Tuesday, the NFL sent out a memos to teams that points out that taunting penalties will be strictly enforced this season after several coaches complained about it during the offseason.

According to the memo, two taunting penalties from a player will result in an ejection.

“The NFL Players Association, coaches and competition committee have all made a strong statement regarding respect among everyone on the field,” the video says. “We saw an increase in actions that clearly are not within the spirit and intent of this rule and not representative of the respect due opponents and others on the field. Game officials have been instructed to strictly enforce the taunting rules, and players and coaches are reminded that two taunting penalties committed by an individual player will result in automatic disqualification. In addition, the taunting player may be fined and/or suspended depending on the severity of the actions.”

Here’s an example of what constitutes a taunting penalty next season.

Here's the video sent out today stating that game officials have been instructed to strictly enforce taunting rules in games this season. pic.twitter.com/1Ssd7h82EJ

Fans were clearly not happy with the NFL’s new strict policy against taunting and got “no fun league” to start trending on social media immediately after the news dropped.

NFL will strictly enforce taunting rules this year. Which means we can say peace out to cool moments like Antoine Winfield Jr. taunting Tyreek Hill like this often. ✌️

The league should actually legalize taunting if anything, lets have some fun. https://t.co/uLo1A9SBuF

These are grown men, not little kids. Stop worrying about people’s feelings being hurt 🤦‍♂️ https://t.co/dM0meADRbb

Taunting is part of the game. Asking these players to be calm, cool, and collected at all times is just not going to happen.

The "No Fun League" strikes again.

The No Fun League strikes again! Beyond frustrating the NFL continues to attempt to legislate emotion out of the game of football https://t.co/djQ0B2UXED

NFL: No Fun League. Getting softer and softer every year with all these new rules https://t.co/wXqGVDHcCJ