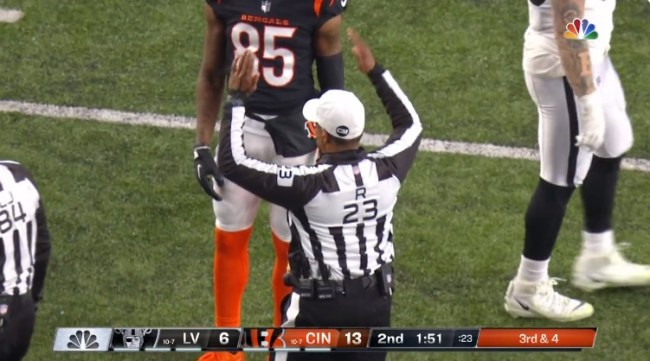 The NFL has released a statement over the controversial erroneous blown whistle in the Bengals-Raiders playoff game, and fans are not satisfied with their response.

On Saturday night, a ref in the Bengals-Raiders game inadvertently blew his whistle while the ball was still in the air during a Joe Burrow TD throw late in the second quarter. The refs allowed the TD to go forward despite the inadvertent whistle.

Due to the fact that the ball was still in the air when the whistle was blown, the touchdown should have counted.

"(3) If the ball is a loose ball resulting from a legal forward pass, a free kick, a fair-catch kick, or a scrimmage kick, the ball is returned to the previous spot, and the down is replayed."

After the Bengals’ 26-19 win, the NFL released a statement claiming the refs allowed the TD because they said the whistle came after the catch.

The refs said the whistle came "after the receiver caught the ball." pic.twitter.com/xZmblLnlAs

Fans were beside themselves and blasted the NFL for straight-up lying about when the whistle took place, considering there’s video evidence.

You can hear the whistle as the pass is being thrown, though? https://t.co/RNGjE41IkI

Boy, the NFL is lying its ass off about that "inadvertent whistle."

You know we have literal sound on our TVs.. right? https://t.co/hBVxOUU0lu

If only the technology existed to know what really happened… https://t.co/1Zboygna0v