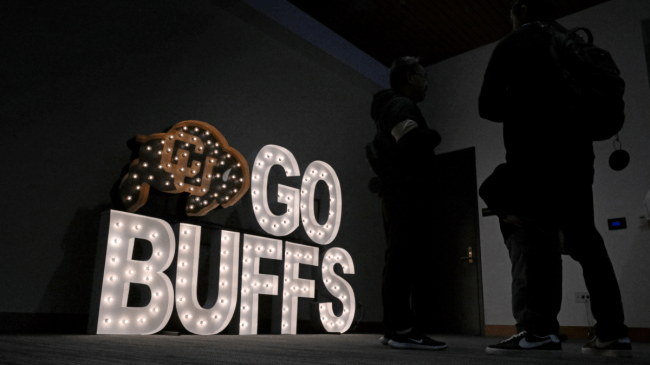 Deion Sanders has made a huge statement in Colorado in a very short time. The new head football coach has excited an entire fanbase in a matter of days, giving everyone hope for the future.

That excitement was seen on full display in the Buffaloes’ most recent basketball game, where Coach Prime was in attendance.

The “Deion Effect” has already been seen in Sanders’ short stint in Boulder. The athletic department is reporting record setting ticket and merchandise numbers as fans flock to the box office. There’s expected to be a near 150% increase in season ticket sales for Coach Prime’s inaugural campaign.

Much of that stems from Sanders’ past as an NFL pro and head coach at Jackson State, where he recorded a 27-5 overall record and led the Tigers to an undefeated season in 2022.

The monumental hire has thrust the program into the national spotlight following decades of irrelevance. Deion Sanders’ name alone has made high profile recruiting prospects look at Colorado as a potential destination. He’s also looking to make some big-time hires on staff.

Buffaloes supporters have experienced a rejuvenation following last year’s 1-11 display, and it’s all come in a matter of days. With Sanders intent on leading the program back to the glory days of the early 1990s, fans are showing their appreciation.

On Thursday, a sold-out crowd at Colorado’s basketball game chanted “Deion Sanders” with the newly hired coach in attendance. The scene was absolutely electric.

Colorado fans are already fired up about Coach Prime 👏 @DeionSanders

The jumbotron panned to Coach Prime in the crowd, causing the arena to erupt. Sanders hopped up out of his seat to show respect to the fans that he’s won over in less than a week.

The train is rolling up in Boulder, and everyone is on board. Deion Sanders is the reason why.