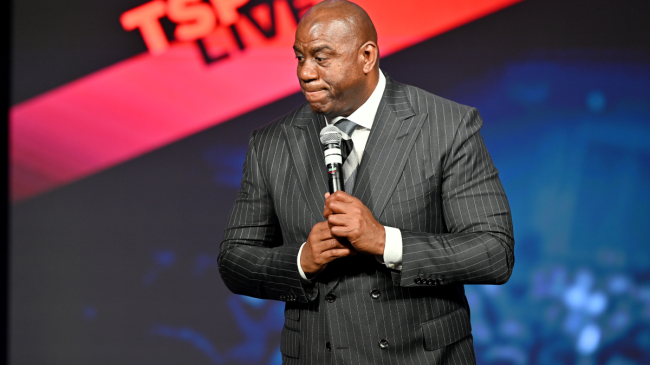 Magic Johnson is a busy man. The former NBA star has his hands in a number of different things, including the Lakers, an entertainment company, the Dodgers, a minor league baseball team, the WNBA, and the MLS.

There’s likely not much down time for the business mogul. When he does find time, he often posts his social media reactions to happenings in the sports world.

Much of that is directed at the Lakers, where he’s been both complimentary and critical of the organization over the last few seasons. Last year, he bashed the team for missing out on the playoffs though he’s often quick to come to the defense of LeBron James.

But with so much going on in his personal life, sometimes his response time can be a little late. That was the case for Johnson this week as Magic was just a bit tardy in his response to major college football news.

Johnson posted his congratulations to Deion Sanders for landing the Colorado job on Thursday. The reply was a few days late.

Sanders was hired on Sunday, but Magic didn’t send his congratulatory post until Thursday. Fans quickly noticed the hilariously late reply, and the commented on the tweet with some hysterical responses.

One fan joked, “Couple days late there, Magic.” Another wrote, “Magic Johnson must have Sprint.”

This follower hysterically posted, “Wait til you hear about what happened to Internet Explorer.” One poster even joked about the moon landing.

Related: Magic Johnson was a candidate to purchase the Denver Broncos