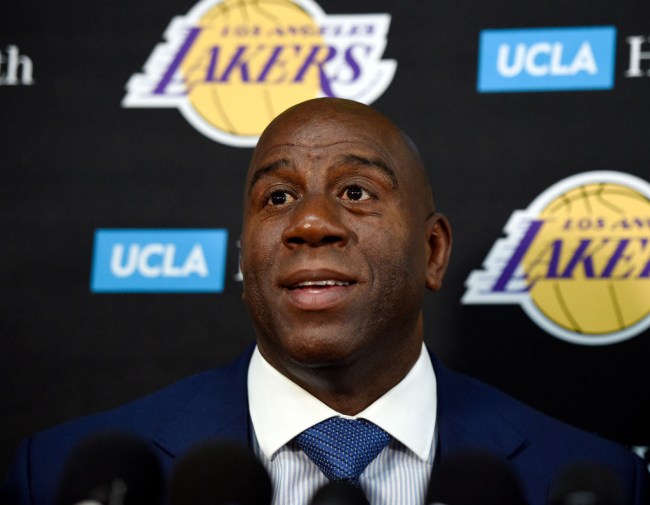 The Los Angeles Lakers have not lived up to expectations this season. That was never more evident than in their most recent blowout loss to the Denver Nuggets on Saturday night.

In the 133-96 defeat, the Lakers allowed their opponent to shoot 51.6% from the field, including a 57% rate from three-point land. The defense was non-existent while LeBron James and Russell Westbrook were about the only players contributing on offense. What’s worse, the Nuggets were missing star player Jamal Murray and had reserves on the court for a majority of the contest.

The loss dropped Los Angeles to 21-22 on the year as they’ve now fallen below the .500 threshold.

That makes them the first LeBron James team to be below .500 this late in the season since his rookie year 2003-04 Cavaliers.

It also sparked a bit of controversy on social media with a former star and employee voicing his concern for the future of the organization. Magic Johnson took to Twitter last night with a message directed to owner Jeanie Buss. In the post, he calls out the team for a lack of effort, saying that’s it’s okay to be outplayed but not to be outworked.

After being blown out by the Nuggets 133-96, we as @Lakers fans can accept being outplayed but we deserve more than a lack of effort and no sense of urgency. Owner @JeanieBuss, you deserve better.

Obviously, the criticism has gained steam. It’s hard to argue with Johnson’s comments as LA owns just five wins against teams with winning records the season. From the outside looking in, the Lakers have been a bad team despite boasting star power of some of the game’s top names. One of those players clapped back, defending his team and dismissing the comments.

Russell Westbrook responded to the tweet with the following response.

His words could fall blind on Westbrook and many other Lakers supporters, as it was Johnson who stepped down as team president a few years back due to disagreements with management. Johnson basically admitted to prioritizing his personal business ventures over the presidency, saying “you know I’m going to be in and out.” It’s interesting to now see him calling out the efforts of current Laker players when he wasn’t giving 100% in his prior role.

Magic Johnson today: "When we sat down & negotiated, I told (Jeanie) I can't give up my businesses. I make more money doing that than becoming the President of the Lakers. So, you know I'm going to be in & out. I said is that ok with you? She said yes."

Magic when he was hired: pic.twitter.com/UC78rNjajm

We’ll have to see if this feud picks up traction should the Lakers continue to play at a poor level. It’s certainly going to take a massive turnaround to change Johnson’s opinion of his former team.