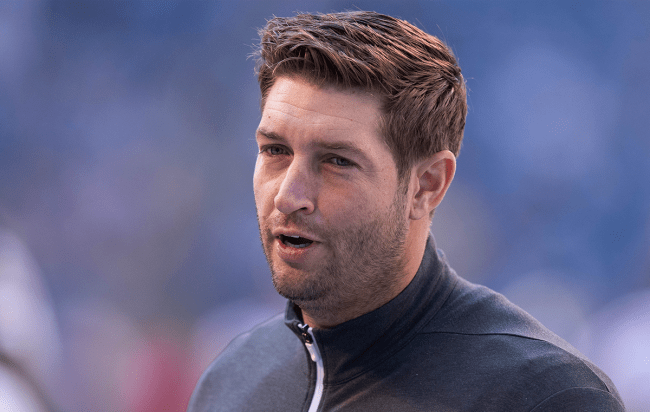 The best way to sum up the 12 seasons Jay Cutler played in the NFL is probably “a career that happened,” as the former quarterback never really lived up to the expectations that resulted in him being selected with the 11th pick in the 2006 draft and ultimately walked away from the game sporting a 74-79 record as a starter.

However, despite being as close to mediocre as they come, Jay Cutler is one of my favorite players of all-time thanks to reasons that have nothing to do with his performance on the gridiron and everything to do with his overall essence (which I believe Kids These Days refer to as a “vibe.”)

More often than not, Cutler took to the field looking like he spent most of his Saturday night putting a serious dent in a bottle of Fireball before waking up the morning after in a panic after remembering he had a football game to play. He carried himself in a way that made it seem like being at the stadium on Sundays was more of an inconvenience than anything, and while that’s probably because he spent his entire career playing for underachieving teams, I like to think at least of few of the 160 interceptions he threw during his time in the league were the result of him thinking about how much he could use a cigarette as opposed to where the defenders were.

While I can’t say I was a dedicated viewer of Very Cavallari, I can confidently say Cutler was the real star of the reality series his ex-wife Kristin dragged him into thanks to episodes where she revealed he was devoting a big chunk of his retirement to watching feeds of deer cams and he introduced the world to “Drunk Jay,” the alter ego who I would love to spend an evening crushing red wine with.

As a result, I am incredibly jealous of a dude who recently ran into Cutler while doing some drinking into the Colorado ski town of Vail, and after the Zubaz-clad Bears fan asked if he could take a picture with the QB, he agreed under one condition: the guy had to chug a pitcher of beer.

The fan proceeded to do exactly that and earned the right to pose with Cutler, who was rocking some camouflage overalls and a Carhartt hat, which is the most on-brand outfit I can think of.

Drink a pitcher, get a picture with Jay Cutler…

Just when I thought I couldn’t love Cutler any more than I already did, he goes and does something like this.