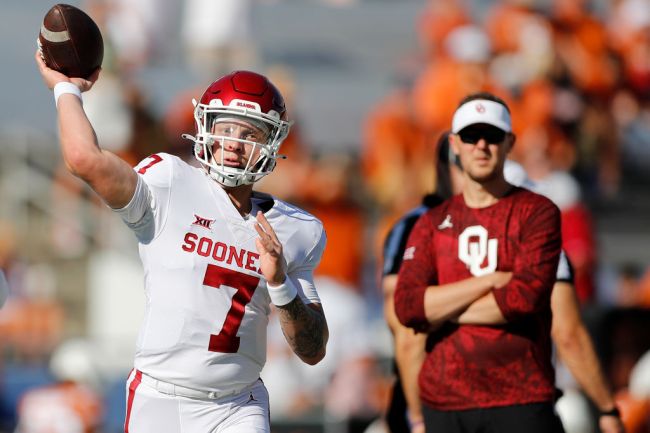 Any time anybody ranks quarterbacks, there is bound to be some controversy. This week alone, there have been a pair of quarterback rankings that have drawn the ire of football fans.

First, it was a list of the NFL’s top 10 quarterbacks that didn’t include Lamar Jackson that had fans fired up. Now, a list of college football’s top 50 quarterbacks has come under fire.

On Monday, PFF released their lost of the top 50 QBs in college football. Today they tweeted out the top 10 of that list and football fans quickly noticed one major issue. Spencer Rattler is listed ahead of CJ Stroud.

It’s really tough to see exactly what the argument is for Rattler over Stroud. Spencer Rattler was benched last season because of his play and replaced by Caleb Williams. During the games he played, Rattler only totaled 1483 yards and 11 touchdowns while throwing 5 interceptions. Meanwhile, CJ Stroud was absolutely lighting it up for Ohio State.

Stroud threw for 4435 yards and 44 touchdowns last season for the Buckeyes while only throwing 6 interceptions. Most impressively, Stroud absolutely shredded Utah in the Rose Bowl. In that game, he posted an incredible 573 yards and 6 touchdowns to lead Ohio State to a 48-45 win.

Unsurprisingly, fans are wondering how they arrived at the decision to list Rattler over Stroud.

RATTLER AHEAD OF STROUD? No way 💀

Rattler over Stroud is hilarious

On top of the issues with the rankings, they also managed to list on QB with the wrong school on their Twitter post. They put the USC logo next to Kedon Slovis, who transferred to Pitt after the 2021 season.

Kedon not at USC, what is this