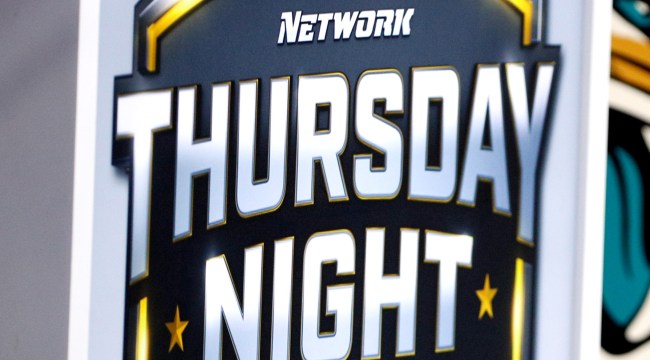 While we still don’t know for certain who the broadcasters will be this fall when Amazon Prime Video takes over the reigns of Thursday Night Football, we do now know it will have a brand new logo.

With rumors of Al Michaels and/or Troy Aikman (that could be one hell of a broadcast team) both leaving their respective positions at NBC and Fox, Amazon Prime Video is certainly shaking things up when it comes to how the future of NFL games will look and sound.

Even Marshawn Lynch, of all people, has reportedly been in talks to join the Amazon Prime Video NFL broadcast team.

Speaking of Amazon Prime Video shaking up how things related to NFL games will look, here is a look at the new logo for Thursday Night Football that was revealed on Tuesday.

welcome to the new era of Thursday Night Football#TNFonPrime pic.twitter.com/8gRGTYqY4J

“We know what NFL games mean to fans, and just like the Rams and Bengals, we’re taking our game to the next level,” said Marie Donoghue, vice president of global sports video at Amazon. “With Prime Video as the exclusive home for TNF we have the ability to build a one-of-a-kind new experience for Prime members. It’s a huge opportunity and one our team is excited to take on as we get ready to kick off this fall.”

According to a press release, “The Prime Video TNF logo was created in partnership with award-winning design studio Pentagram, and unites two iconic brands — Prime Video and the NFL. The logo was inspired by the tip of the arrow in the Amazon smile and the pointed shape of a football, giving Prime Video a modern, original brand identification that will be threaded throughout production next season. The typeface also carries special meaning as it captures the natural movement and agility of football, and represents Prime Video’s intent to break boundaries and redefine the next generation of football fans.”

It also looks like kind of like that famous little blue pill. But hey, that’s just my opinion. Let’s see what other NFL fans thinks of Amazon’s new Thursday Night Football logo.

2 year old make this logo? Lol couldn't even stay in the lines 🤷🏽‍♂️

Did this in 5 minutes on my phone free hand grocery shopping lol pic.twitter.com/d1AyOuv2Us

Amazon better be prepared to stream with ZERO buffering issues or there will be hell to pay to upset NFL fans...

The logo seems to mimic the quality of play on Thursday Night Football.

Well at least we know there isn't some hidden graphics team that could make the Prime Video app better.