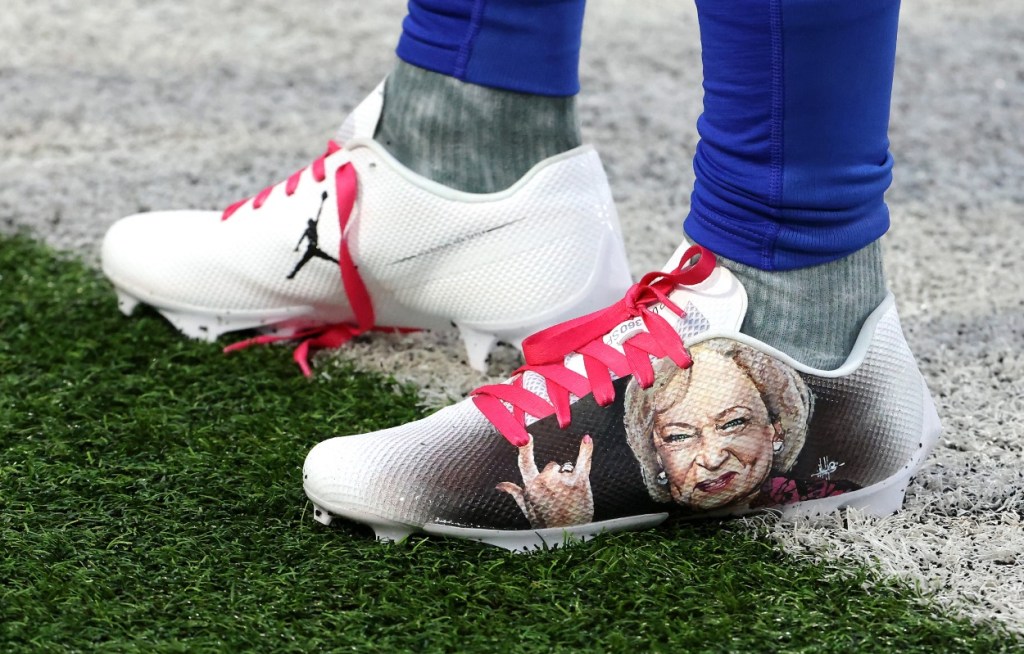 The Buffalo Bills enter the NFL Playoffs as the #3 seed in the AFC (11-6) and they’ll host the New England Patriots on Wild Card weekend. Bills WR Stefon Diggs finished the regular season with 1225 yards (8th in NFL), 103 receptions (10th in NFL), and 10 touchdowns (t-6th).

Stefon Diggs only wore the Betty White cleats in pregame warmups because the NFL is really strict about in-game cleats. It was only a week earlier that the NFL threatened to remove Raiders WR DeSean Jackson from a game if he wore his John Madden tribute cleats. The NFL allows players to wear custom cleats one week a year for ‘My Cause, My Cleats’ but other than that, it requires special permission that’s rarely granted.

These Betty White cleats feature her likeness doing the ‘rock on’ symbol along with the iconic ‘thank you for being a friend’ tagline from Golden Girls. Fans on Twitter were loving these cleats so let’s check ’em out.

Stefon Diggs was one of the first athletes I saw on Twitter pay tribute to the loss of Betty White. She was clearly an important figure in his life and it’s cool to see how great those custom Betty White tribute cleats actually came out. With that style, they could’ve verged too close to ‘caricature’ and looked awful but the finished product is amazing and both Betty White and Stefon Diggs fans were loving it on Twitter.

I would wear these to church

His stock with me has gone way up. Good job @stefondiggs

All Diggs does is take Ws

Stefon Diggs wears a new pair of custom cleats every week in warmups and those cleats then go to charities where they can be auctioned off to raise funds. These might be the best cleats he’s worn yet.