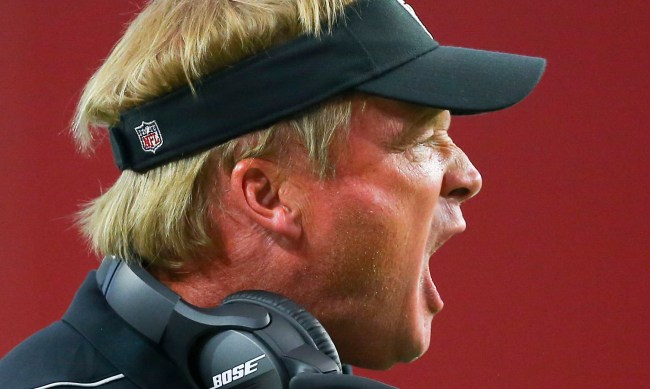 The fourth episode of Hard Knocks with the Oakland Raiders aired on HBO Tuesday night in its usual spot at 10 p.m. ET.

HOWEVER, for some reason, the higher-ups at HBO decided that, unlike the first three episodes which all aired at that same time on HBO Now, this week NFL fans who use that streaming service discovered at 10 p.m. ET that they would have to wait as Hard Knocks was delayed an hour and would not air on HBO Now until 11 p.m. ET.

This is where the magic happens 🙌#HardKnocks is back tonight at 10 PM ET/PT pic.twitter.com/c0LOhuxux3

So, unless you were one of the 11,000 followers of the @HBONowHelp Twitter account, and happened to check Twitter Tuesday night, you had no clue that anything had changed.

Tonight's EP4 of #HardKnocks will be available on #HBONOW at 11 PM ET. Please check https://t.co/mz40nonR0V for updates.

The irony of Hard Knocks being suddenly put on a one-hour delay for a streaming service named HBO NOW was certainly not lost on furious football fans.

I thought it was called HBO Now, not HBO Wait Another Hour. I gotta work tomorrow. This a great way to lose customers. I want my #HardKnocks

Marketing director at @HBOGOhelp: How can we increase engagements?

Absolute crap! Entire value proposition of the app is the ability to watch your content LIVE as it airs.

Was advertised to start at 10! HBO NO

At least HBO offered some sort of explanation.

Hi, apologies for the delay. Some Hard Knocks episodes require additional time to be added to HBO NOW due to real-time filming and editing. Tonight’s episode of Hard Knocks is now available. Please refresh your app. Thank you. ^AF

Then why is it available to stream the episode right now if I go through Amazon Prime?