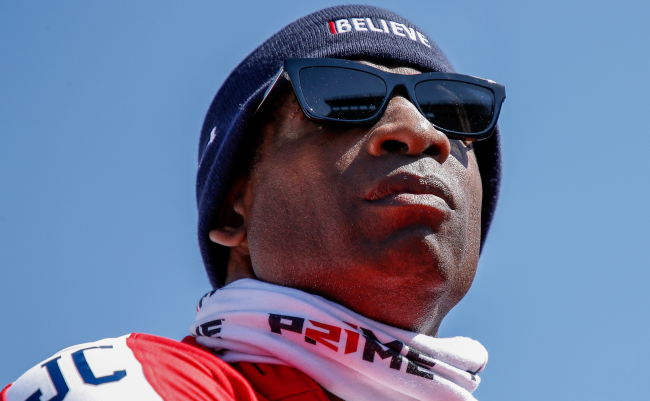 Deion Sanders may currently be down, having missed his second game in a row Saturday while following foot surgery, be as usual, Coach Prime is still making news.

A new report by Drew Davison of the Fort Worth-Star Telegram claims Deion Sanders is among the names being considered as a possible successor to former Horned Frogs head coach Gary Patterson.

Reactions to the news that Deion Sanders is apparently in the mix for the TCU head coaching job were rather mixed on social media.

Deion Sanders name mentioned as a candidate for TCU HC vacancy. Buckle up for the longest month of your life. https://t.co/U1kxsYCEo0

Rumblings of Deion Sanders interviewing for the TCU job? What does Gus Johnson say to that one?

Deion Sanders to TCU is actually way better than him coming to Texas Tech. We get all of the entertainment factors and none of the potential headaches.

@DeionSanders TCU needs you coach! We’ve got the best fans in the big twelve and with you leading us theirs no limit to the level of recruits we could get or championships we could make and win! Not to mention amount of 💸💸💸 in your bank…

Gary is a legend. Kids went to TCU to play for Gary. We’ve already lost 3 commits and more will happen soon. This is the biggest hire in program history. We need to make a splash. DEION SANDERS NEEDS TO BE HIRED.

Deion Sanders has left every place he has been at in shambles and hurt kids/families along the way. He has a proven track record of not caring about academics and using his SA for his benefit. I doubt that TCU is actually considering him as a candidate, and I hope they never do.

But can you tell us how you really feel?

In addition to his work as head coach at Jackson State, Deion Sanders has also been the head coach at his now defunct Prime Prep Academy as well as at Triple A Academy in Dallas. Sanders was also an offensive coordinator at Trinity Christian – Cedar Hill.

Sanders, who is still cheering his team on from afar, tweeted after the Tigers win over Mississippi Valley State University, “We have truly been tested these past couple of weeks regarding our strength, mentally and physically, as individuals and as a team. I AM SO DARN PROUD of each and every one of these young men and women that are a part and connected to this team.”

On Monday, Gary Harrell, the interim coach for Jackson State, gave an update on Deion’s status, “He’s doing well right now. I just try to leave anything as far as medical things, just try to let him make those comments when he gets back.”