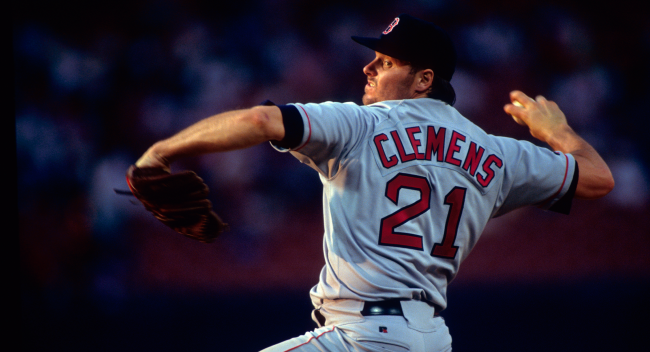 For the second year in a row, the Baseball Writers Association of America proved, without a shadow of a doubt, after not electing Roger Clemens nor Barry Bonds, that the Baseball Hall of Fame is pointless. (As if it already wasn’t when 16 voters left Greg Maddux their ballot in 2014.)

This year, after electing NO ONE, the writers decided to only elect one player: David Ortiz.

Related: David Ortiz Calls Boston Writer An ‘A–hole’ For Leaving Him Off Hall Of Fame Ballot

In 2014, the Baseball Hall of Fame changed its rules, reducing the number of years a player could be eligible for induction from 15 years to 10. This means, that after Tuesday’s vote, Barry Bonds, Curt Schilling, Sammy Sosa and Roger Clemens now join Pete Rose, Mark McGwire, Manny Ramirez, Alex Rodriguez, and Rafael Palmeiro as players with Hall of Fame stats that will not be elected to the Hall of Fame by the writers.

Following the vote, Bonds and Sosa were silent. Neither of them, at this time, have issued any sort of comment.

Schilling, of course, took to Twitter. This year, however, he wasn’t making any threats. Instead, he just congratulated his former teammate David Ortiz.

“Every year the conversation revolves around who didn’t get in,” Schilling tweeted. “Like all star voting, who got cheated. I say it every year and especially this year, focus on who did get in. @davidortiz deserved a 1st ballot induction! Congratulations my friend you earned it! #bigpapiHoF.”

Related: MLB Fans Are Melting Down After Barry Bonds And Roger Clemens Get Snubbed From Hall Of Fame

Roger Clemens, on the other hand, did directly address the elephant in the room

“Hey y’all! I figured I’d give y’all a statement since it’s that time of the year again,” Clemens tweeted.

“My family and I put the HOF in the rear view mirror ten years ago. I didn’t play baseball to get into the HOF. I played to make a generational difference in the lives of my family. Then focus on winning championships while giving back to my community and the fans as well.

“It was my passion. I gave it all I had, the right way, for my family and for the fans who supported me,” he continued. “I am grateful for that support. I would like to thank those who took the time to look at the facts and vote for me. Hopefully everyone can now close this book and keep their eyes forward focusing on what is really important in life. All love!”

Thank y’all for the great responses! Much appreciated. Not sure if I did the thread right 🤦‍♂️ so here’s a screenshot pic.twitter.com/oSGIniv1Bm

Baseball fans and some former players’ reactions to Clemens’ statement were all over the board.

As someone who competed against you numerous times and usually came out on the losing end, you were the ultimate competitor.

When someone asks me what pitchers i modeled myself after, answer is always @rogerclemens and Doc Halladay

You may or may not deserve to be in the hall, but please don't pretend you did it the "right" way.

Rocket you are a legend and deserved to be on the Hall. It’s become a political popularity contest run by nerds who never played the game. You should have been a 1st ballot HOF. ✌️

Roger, I’m 62 years old and you’ve been in my Hall of Fame since the day you walked away from the game I love you man 🤘 this archaic approach to the Hall of Fame needs to end and legendary broadcasters need to be brought in with a voice. Veterans committee has your back 😉

Maybe your statement should be about how you did steroids, and have regretted that decision and how you would like to apologize to major-league baseball and all the fans

Great sentiment. Thanks for that and for your two Cy Young years in Toronto. It was a treat to watch you pitch, which I did at most of your home starts. It was also fun to actually cheer for you, in between your Red Sox & Yankee years. The baseball writers got this very wrong.

Except you didn’t do it the right way. If you had, you’d have gotten the call 10 years ago.

You’re one of the biggest pricks I’ve ever covered but you should be in. The system is broken. All the steroid guys should be in with a recognition of the era. Put ‘em all in a wing and/or state it on the plaque in the Great Hall. Oh. And thanks for the Yankee years.