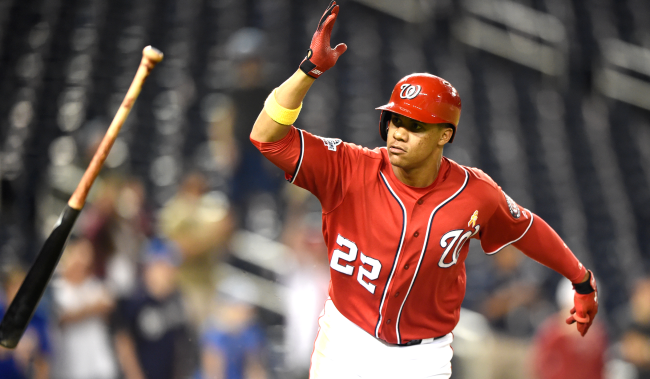 Without any doubt, outfielder Juan Soto is one of the best players in Major League Baseball and deserves to be paid as such. Just don’t tell that to the Washington Nationals whose 13-year, $350 million contract extension offer Soto rejected before the lockout.

At just 23-years-old, Soto is a generational talent that has proven from the age of 19 that no stage is too big for him.

For all of that tremendous success, Soto has been paid around $11 million … TOTAL.

To put that into perspective, as of right now, 97 Major League Baseball players will make more than that this season.

Juan Soto, thanks to Major League Baseball’s very generous arbitration proceedings (that was sarcasm), will earn $15 million in 2022, making him the 69th highest paid player in MLB (nice).

So what is Juan Soto worth?

Soto, 23, finished second in NL MVP voting last season and is off to a historically great start to his career, slashing .301/.432/.550 in four big league seasons. He's due to hit free agency after the 2024 season, when he'll just have turned 26, and could smash contract records.

On Wednesday, news broke that Juan Soto had turned down the aforementioned 13 year, $350 million contract extension offer from the Nationals before the lockout began.

Juan Soto: “Yes, they made me the offer a couple of months ago, before the lockout we have in baseball”.

"But right now, me and my agents think the best option is to go year after year and wait for free agency. My agent, Scott Boras, is in control of that situation," he added. https://t.co/C2Rdw9kW6B

Baseball fans, as they almost always are these days, were pretty disgusted with Major League Baseball’s leadership and owners when they heard the news.

Low-ball city. (Plus you know Lerner had a bunch of deferments in there). His next contract will start with a 4 (minimum). https://t.co/jn9RZ532Ax

Not enough money IMO gonna be the first 500 million in baseball https://t.co/xhJhef80lO

The (not so) funny thing is, Juan Soto can’t do anything about the offer because according to Major League Baseball’s archaic salary rules, they own Soto’s rights for the next three seasons no matter how good he does.