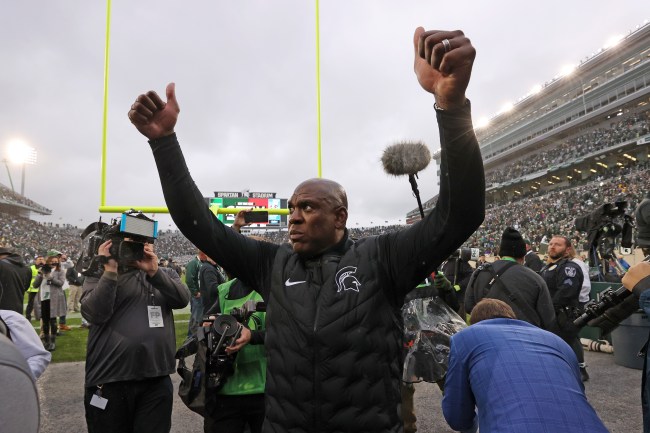 According to David Jesse of the Detroit Free Press, Mel Tucker is set to sign an enormous contract extension that will keep him as Michigan State’s head football coach for another 10 years. The contract is worth a total of $95 million and represents a massive investment in the football program from Michigan State.

Fan sentiment is split on the contract, though, with some excited to see the coach sticking around.

Good for Michigan State for ponying up. Mel Tucker is big time.

Love it. Mel Tucker is a class act and a damn good coach

Others just don’t believe that this year’s schedule has really told us much about Tucker as a coach.

Mel Tucker was 7-12 entering this year.
This season, he beat two ranked teams (one being an inflated Miami).

Justifying that contract based on wins against N’western, an FCS school, Nebraska, West Kentucky, Rutgers, and Indiana is nuts.

This guy is just happy to get to take a victory lap after his tv interview led to him being mocked for believing in Tucker.

I was stopped by Local 4 news on the way to class the day Michigan State hired Mel Tucker. I was made fun of by a local sports podcast who used this clip because I said it was a great hire.

Been having the last laugh for the last 10 or so weeks, #GoGreen. pic.twitter.com/DRnm9Eow5g

There’s no doubt that this is a high-risk high-reward move from the Spartans. If Mel Tucker turns out to be the coach who can repeatedly lead Michigan State to contention in the Big 10 then they’ll look like geniuses for keeping away from other suitors.

If Michigan State goes back to hovering around .500 next year like they did during Mark Dantonio’s last couple of seasons, then they are going to be ridiculed mercilessly for this contract.

Right now, the Spartans better just look good against Ohio State on Saturday or the jokes about this contract will come quickly.