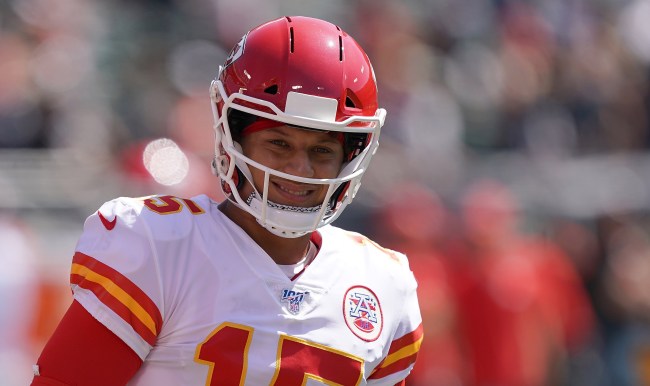 He won the NFL Most Valuable Player Award in his first season as a starter and there is even talk that Mahomes could become the first quarterback to throw for 6,000 yards and 60 TDs in NFL history.

Last season, Mahomes became just the second quarterback to throw for more than 5,000 yards with 50 touchdown passes. This year, he’s currently on pace for more than 6,500 yards passing and 56 touchdowns… and he hasn’t even had the use of Tyreek Hill yet.

But c’mon KC fans, there are better ways to show your love for the man than committing a crime, which is exactly what two Chiefs fans did in in Lawrence, Kansas the other day.

A man and woman were arrested Thursday after they allegedly stole a life-sized cutout of Mahomes from a McDonald’s, ran out the door, jumped into a car and sped away, reports the Associated Press.

Not to worry though. THe McDonald’s got their Mahomes cardboard cutout back because, as one can imagine, these two weren’t the shapest knives in the drawer and ended up crashing their car as they made their getaway.

Police officers investigating the crash spotted the cutout and noticed that the couple’s vehicle matched the description of the one that was used in the McDonald’s theft.

The two were issued notices to appear in court for alleged theft and were cited in the accident, reported Lawrence Police Department spokesman Patrick Compton.

As for the kidnapped cutout, it was returned to safely back to its home inside the McDonald’s, said Compton.