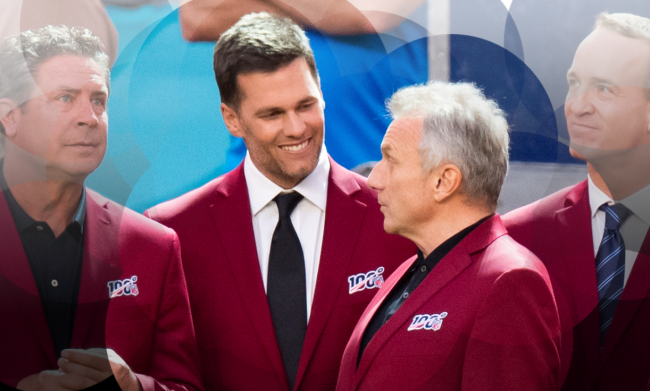 A whole lot of NFL fans heard what Tom Brady had to say during his Thursday presser and now think that he wants to play for the 49ers in 2023.

With San Francisco down to Brock Purdy, the team’s third-string quarterback this week, thanks to Trey Lance and Jimmy Garoppolo both being out with injuries, 49ers fans are looking for any glimmer of hope at the position these days.

Both Brady and Garoppolo will be free agents in 2023 and with Jimmy G not expected to be back and Lance still going to basically be a rookie again, TB12 might actually be a good fit next year for the Niners.

“Two general managers said last week they expect the 49ers to seriously inquire about Brady and Green Bay’s Aaron Rodgers depending on whether either or both of those quarterbacks decide to move on,” Outkick reported this week.

That alone was enough to perk up the ears of 49ers fans, but what Tom Brady said on Thursday during his media session really fed the fire.

“I’ll always consider myself a California kid,” Brady told the media. “I grew up loving Joe Montana and Steve Young and going to 49er games, that’s when I fell in love with football. We had four tickets. My mom and dad would go, I would go, and then one of my sisters would go. It was a great time.”

#Bucs QB Tom Brady on his lone 2016 performance in San Francisco and growing up a California kid: pic.twitter.com/5czXBlrbIz

Lol, basically it’s his interview for this weekend. 49ers is his next destination.

That face you make when you can’t wait to be QB1 next year for the team you’re playing this week pic.twitter.com/Sae3G18jJw

Brady also mentioned how he loved the 49ers all the way through college, but when they passed on taking him several times in the NFL Draft, suddenly he hated them. Still, it would be fulfilling a childhood dream for Brady to wear the same uniform Joe Montana and Steve Young did in their heydays. It could be the only real achievement left on TB12’s football bucket list.

In the meantime, Brady is just hoping that Joey Bosa is nice to him on Sunday.

Tom Brady seems a bit worried that Nick Bosa is lining up against him on Sunday 😅 #49ers || #FTTB pic.twitter.com/OKzblb5pS6