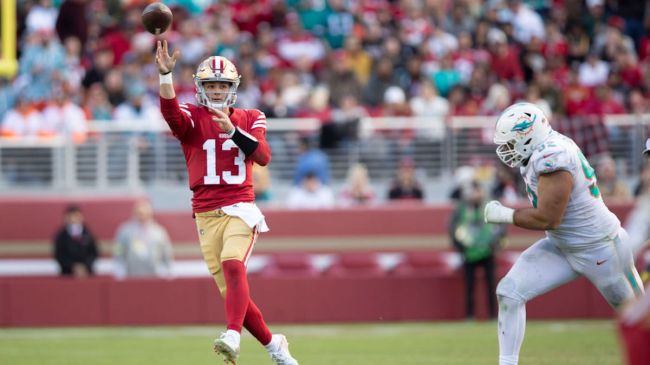 While the San Francisco 49ers have the talent and coaching staff required to make a Super Bowl run, they certainly haven’t had the luck that’s required to win a championship as they’ve lost both of their top two starting quarterbacks to season-ending injuries.

After losing second-year QB Trey Lance to an ankle injury, the 49ers lost back-up Jimmy Garoppolo to a foot injury over the weekend (although, according to reports, he won’t need surgery and could return for the playoffs if the Niners qualify).

Without the services of both Lance and Jimmy G, Kyle Shanahan and the 49ers are now turning to rookie signal-caller Brock Purdy, who the team drafted out of Iowa State with the FINAL pick of the 2022 NFL Draft.

Despite Purdy’s status as “Mr. Irrelevant” (a moniker that’s given to the last pick in every NFL Draft), his teammates certainly sound like they believe in him, as potential future Hall of Fame tackle Trent Williams recently compared the 22-year-old to Hall of Famer Peyton Manning.

“You would think he’s been in the league 15 years,” Williams said. “If you’re talking, he’ll say, ‘Shut your ass up.’ He ain’t no timid rookie feeling his way around. He will get on your ass. You would think he’s like Peyton Manning or something. Wide receivers not running, you’ll hear him cussing a wide receiver out.”

In relief of Jimmy G against the Dolphins, Purdy completed 25/37 passes for 210 yards, two touchdowns, and one interception.

To close out the 2022 season, the 8-4 Niners — who are in first place in the NFC West and are currently the third seed in the NFC playoff picture — will take on the Tampa Bay Bucs, Seattle Seahawks, Washington Commanders, Las Vegas Raiders and Arizona Cardinals.