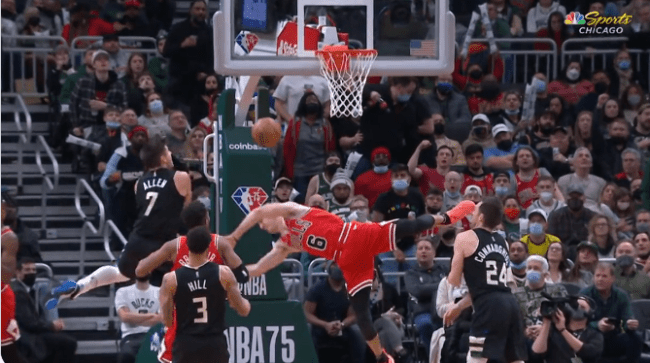 Grayson Allen is once again at the controversy after his latest dirty play.

On Friday night, Allen was ejected from the Bulls-Bucks game after pulling down on Alex Caruso’s arm while he was in mid-air during a layup attempt.

On Saturday, it was revealed that Caruso suffered a broken wrist on the play and would require surgery.

Fans immediately called for Allen to get suspended for the dirty play on Caruso.

There you go—-unbelievable. Alex Caruso gone 6-8 weeks. The NBA needs to suspend Grayson Allen…how about 6-8 weeks as well. Just my opinion. Only my opinion. Caruso just returned from a foot injury and H&S/ He is a HUGE piece of the Bulls core group. This is a MAJOR loss.

And send his game checks to Caruso.

Eye for an eye — Grayson Allen should have to sit for as long as Alex Caruso misses time. https://t.co/wwJxTfGG8L

This should absolutely factor into the discipline Grayson Allen receives from the NBA. https://t.co/nWUUqqYavg